RHS Chelsea Flower Show - Our Stand Through The Years!

Over the 14 years we have exhibited at the RHS Chelsea Flower Show there have been some fantastic times winning awards most years for the stand, winning product of the year twice and most of the time the weather has been pretty kind - although we always have umbrellas to hand! It's not just the hairstyles and fashions that have changed over the years, the Harrod Horticultural stand is unrecognisable from our first show 14 years ago!

Back in 2004 Harrod Horticulturalorders exhibited at the prestigious RHS Chelsea Flower Show for the first time and what an experience. We were blown away by the amount of visitors to the stand, the interest in the products and the gardening knowledge of the crowd. We only had a small offering with some link stake plant supports and Sneeboer Tools, but it was a great introduction to the show and whetted our appetite for the next year! 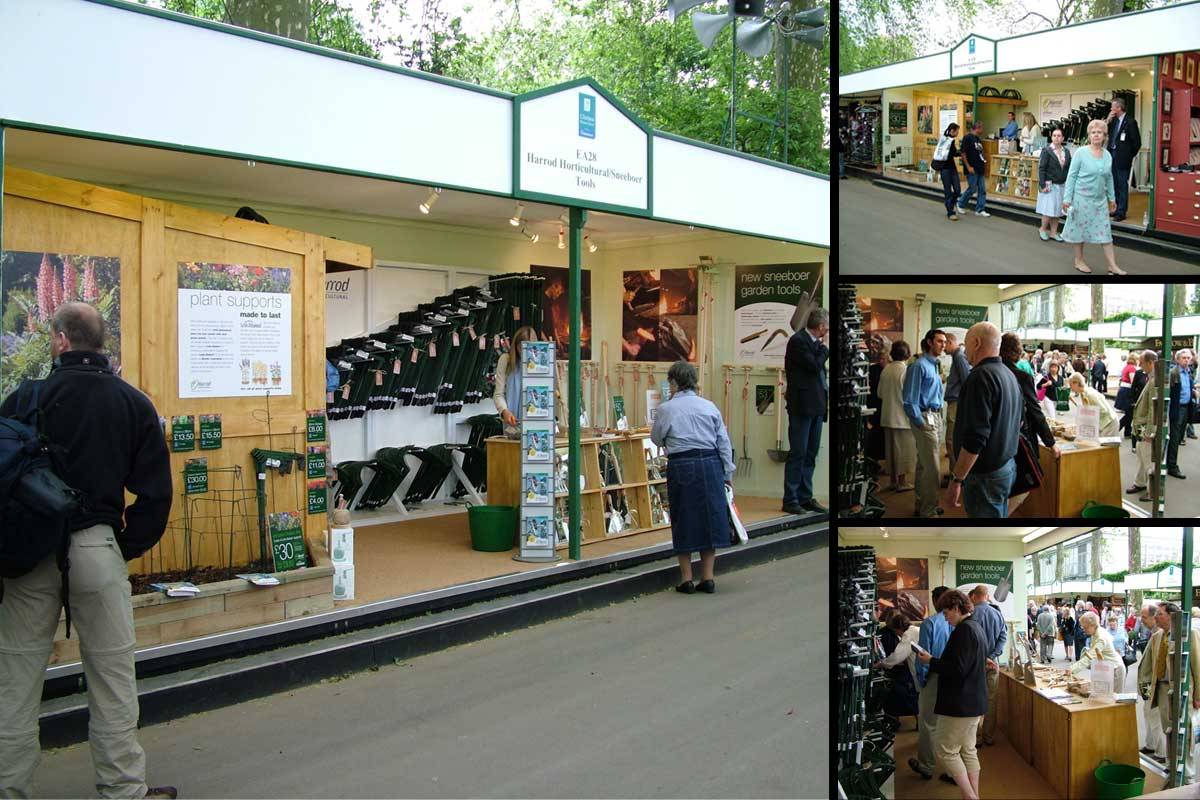 After such an exciting and successful first year in 2005 we went for a larger stand on the more prestigious Pavilion Way - little did we know this would be our home for the next 9 years at the show! The larger stand gave us the chance to offer more of our range. We even now had room to display our Fruit Cages. We also had a 'Sneeboer' shop with lots of tools available and Jaap Sneeboer was again on the stand to talk to customers and explaining the history and craftmanship that goes into every Sneeboer tool. It was another great show and we really benefitted from having a bigger stand. 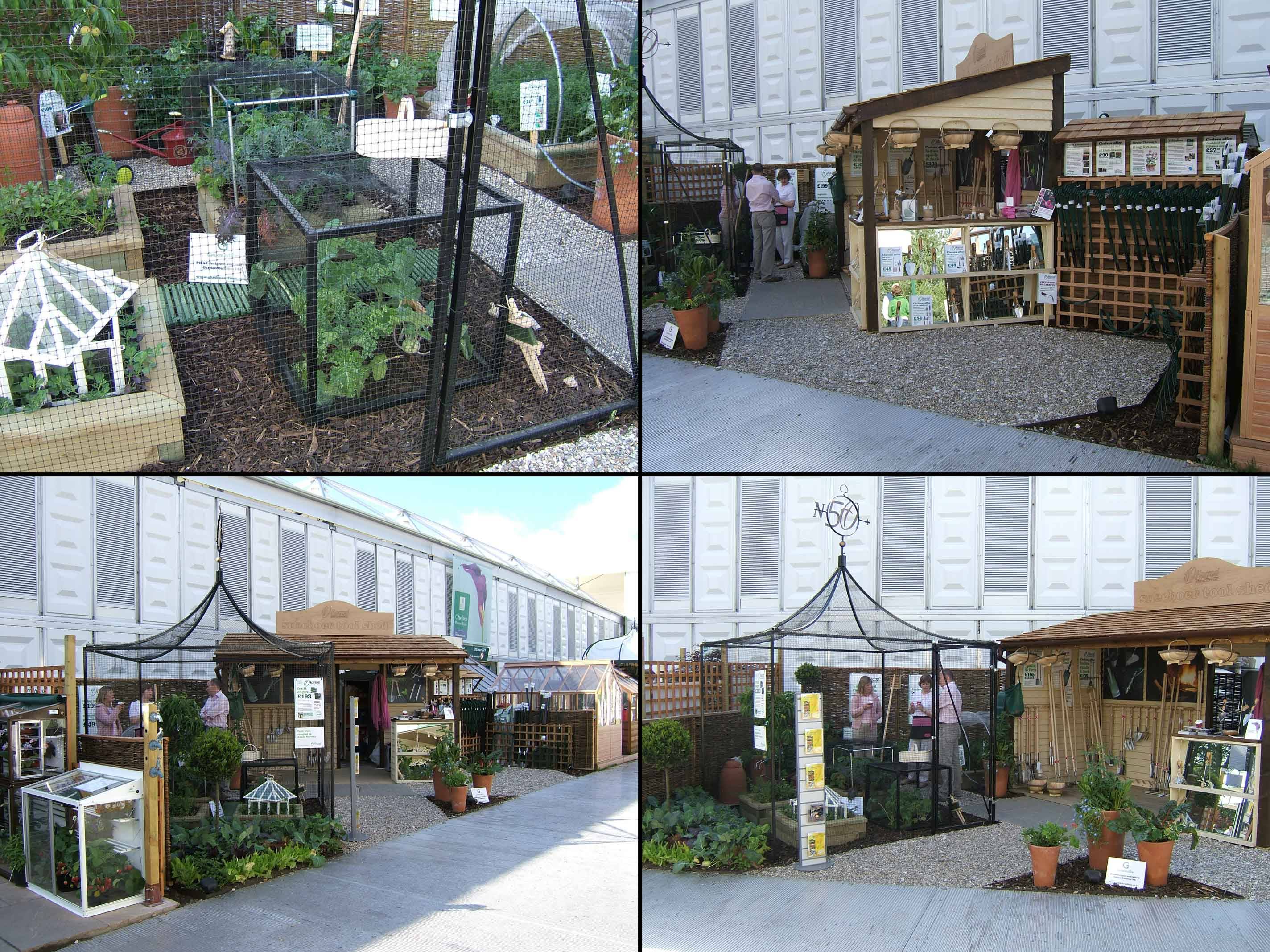 In 2006 we made the shop even bigger offering a whole range of products including a lot more gardening sundries - we couldn't believe how many packs of soft tie we sold! The trips backwards and forwards to the car park to collect stock every morning, became the job we all wanted to avoid! Weaving through the Chelsea throngs with a sack barrow laden with products, especially the long handled sneeboer tools, was not for the faint hearted!

Once again we had Jaap Sneeboer with us, but this time he was also engraving trowels for customers on the stand - it certainly kept him busy with lots of customers wanting a unique Chelsea Flower Show momento. 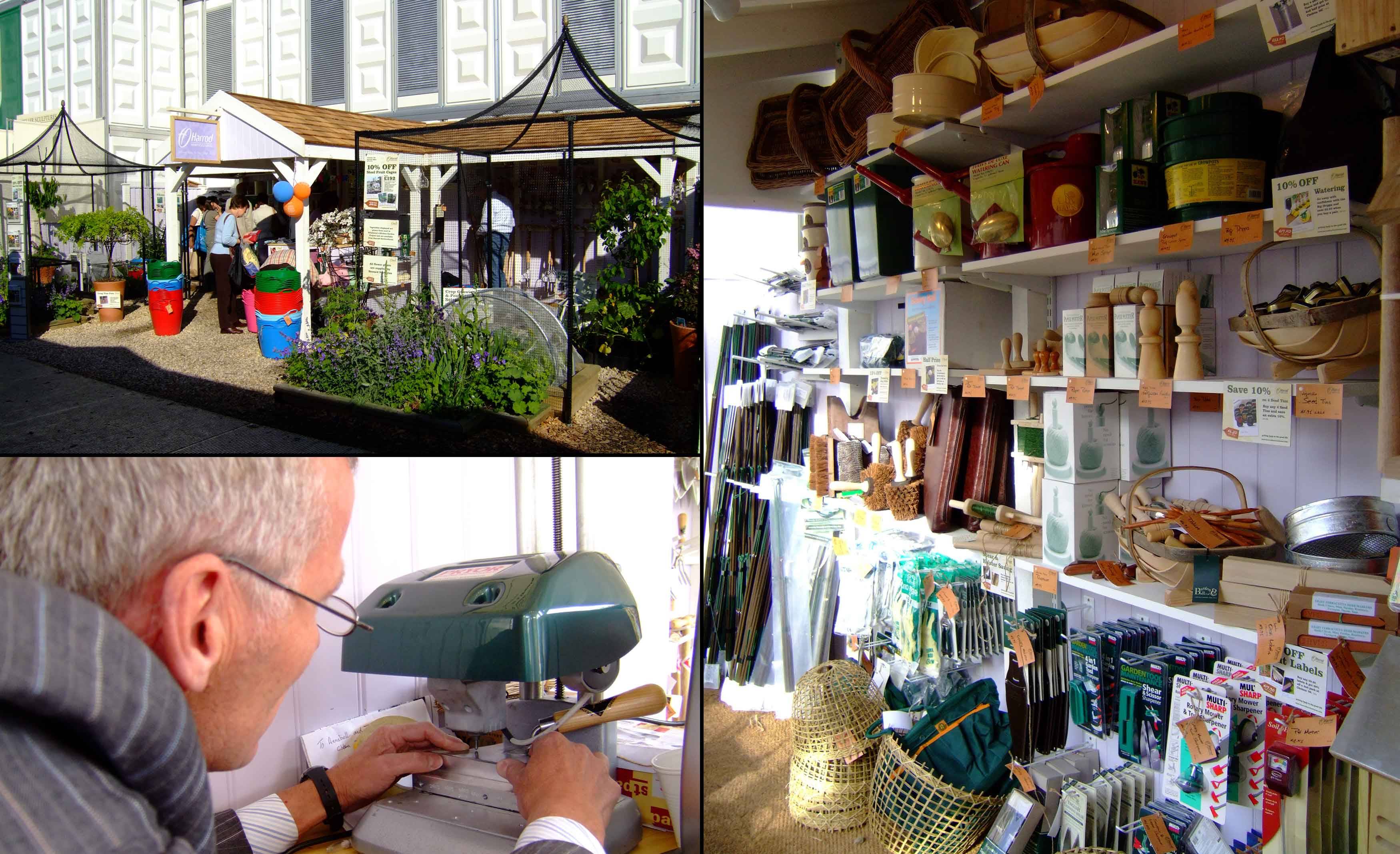 For 2007 we followed on from the success of 2006 with the stand remaining relatively unchanged, apart from the colour. Keeping on trend and picking the right colour for the stand is always a big debate, but the green picked for the stand coupled with the pink shirts for the staff looked great. The planting definitely moved up a notch with some great specimen plants.

The superior raised beds were definitely the star of the show and we lost count of how many times we recited the benefits of raised bed gardening to customers! It must have sunk in though as raised beds went on to become one of our strongest ranges until the present day. The peaked roof fruit cage also received a lot of attention with lots of customers commenting on how robust and sturdy the cage and netting were 'in the flesh'.

Of course Jaap Sneeboer was again on hand to answer all garden tool queries - he really had become a part of the Harrod Horticultural team! 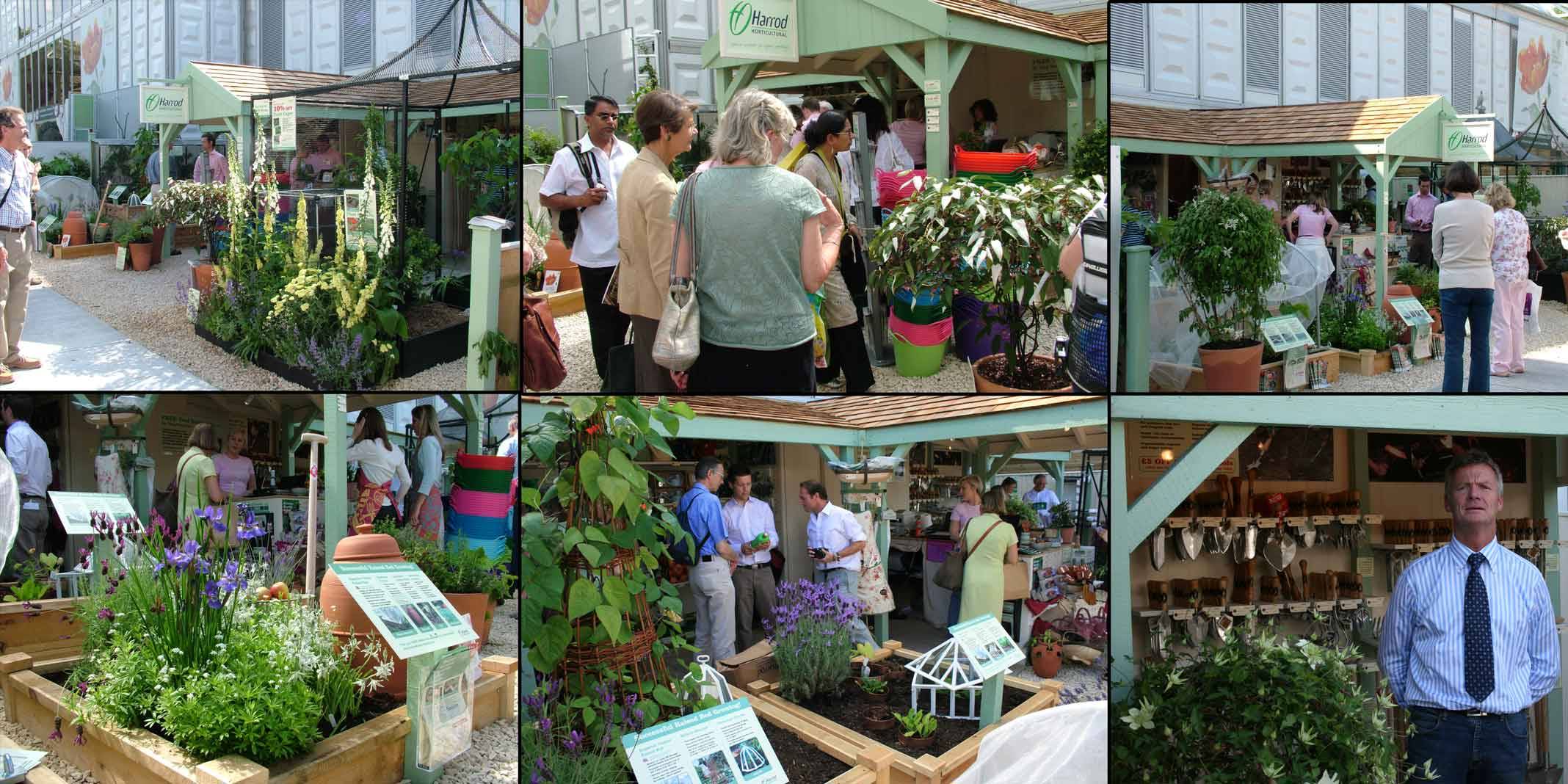 In 2008 we pulled out all the stops arranging for singer and presenter Kim Wilde to be on the stand on Press Day. Kim was really promoting gardening at the time and when the press assembled we couldn't get near our own stand with the hoard of photographers up to about six deep! Obviously the coverage we received was great for our brand and getting to meet Kim (who was so down to earth and friendly) was a real privilege.

The stand and the shop had a similar design to the previous year but once again the colour was updated. The stand was pink, but would have been a much brighter pink until we were told it was too bright and needed to be toned down! The repainting went on long into the night but the baby pink colour looked great in the end.

2008 we also launched our range of Fruit Presses which made a real statement at the front of the stand and received loads of interest from customers who loved the traditional design of these sturdy presses - we also were very grateful to a local farmer for lending us the barrow to display them on.

2009 was another fantastic show for us, with stand using the same design as previous years but this tear the colour theme was more light blue and cream. The weather was not as favourable as other years, but some were grateful that the sun was not beating down for those long 12 hour days! It didn't put off any showgoers and the update to the Sneeboer area worked really well. As ever Jaap was on hand for any 'Sneeboer' queries and we sold lots of plant ties and other gardening sundries. The raised beds with crop protection hoops were very popular and our pyramid cloche also went down well. As with every year we got a lot more learnings about our customers and the problems and solutions they come across throughout the gardening year. 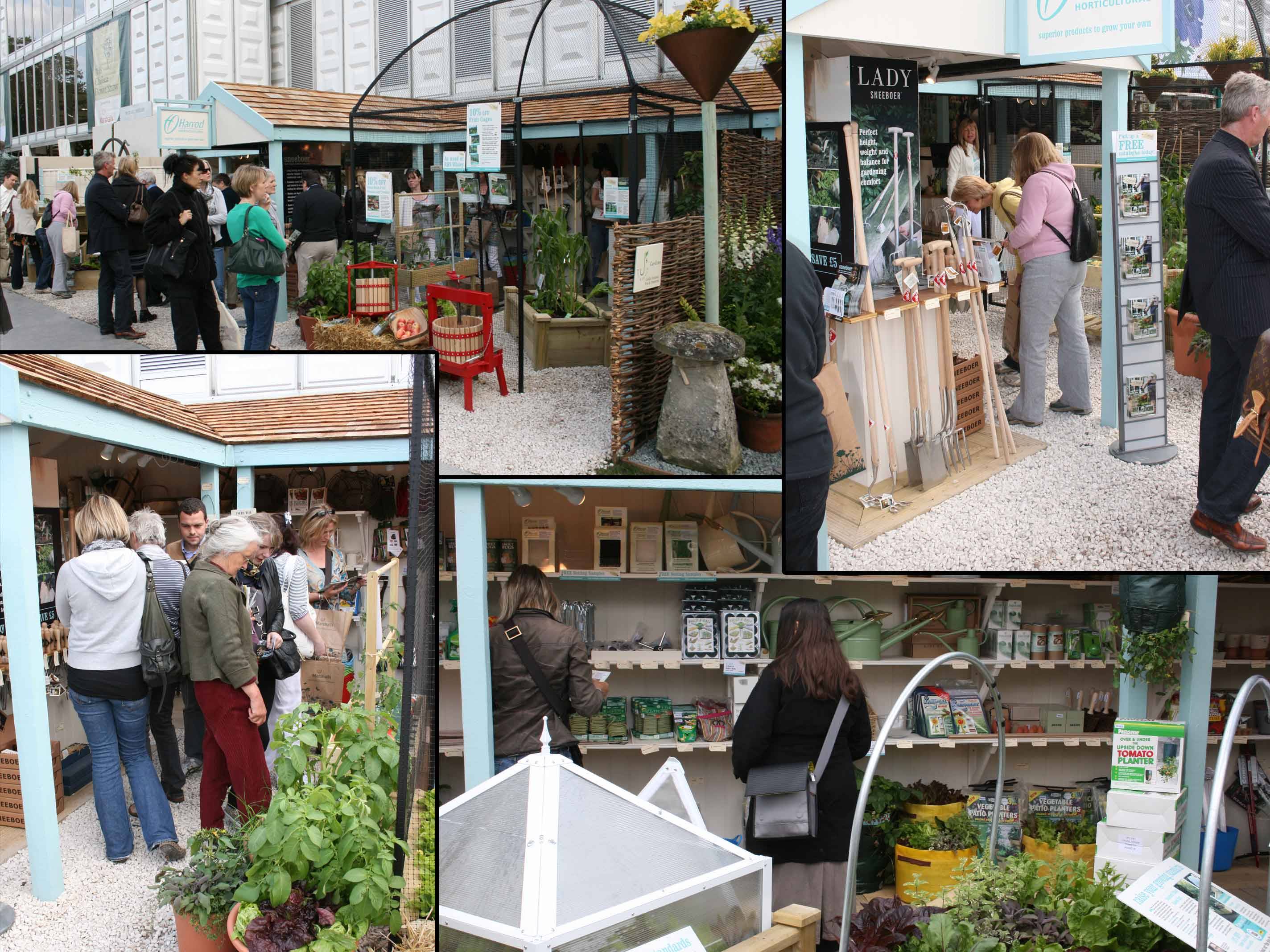 In 2010 we introduced a lot of new wooden planters to the range. This included our now very popular Manger Planters along with a Wall Planter, A-Frame Planter and a practical Ladder Planter. All designed to make it easier to grow your own on the patio or where space is limited. There was a lot of interest in the new planters at the show.

We also had a representative from Nemaslug on the stand explaining how these nematodes work to customers and also did a great job at selling all the other Harrod Horticultural products as well. 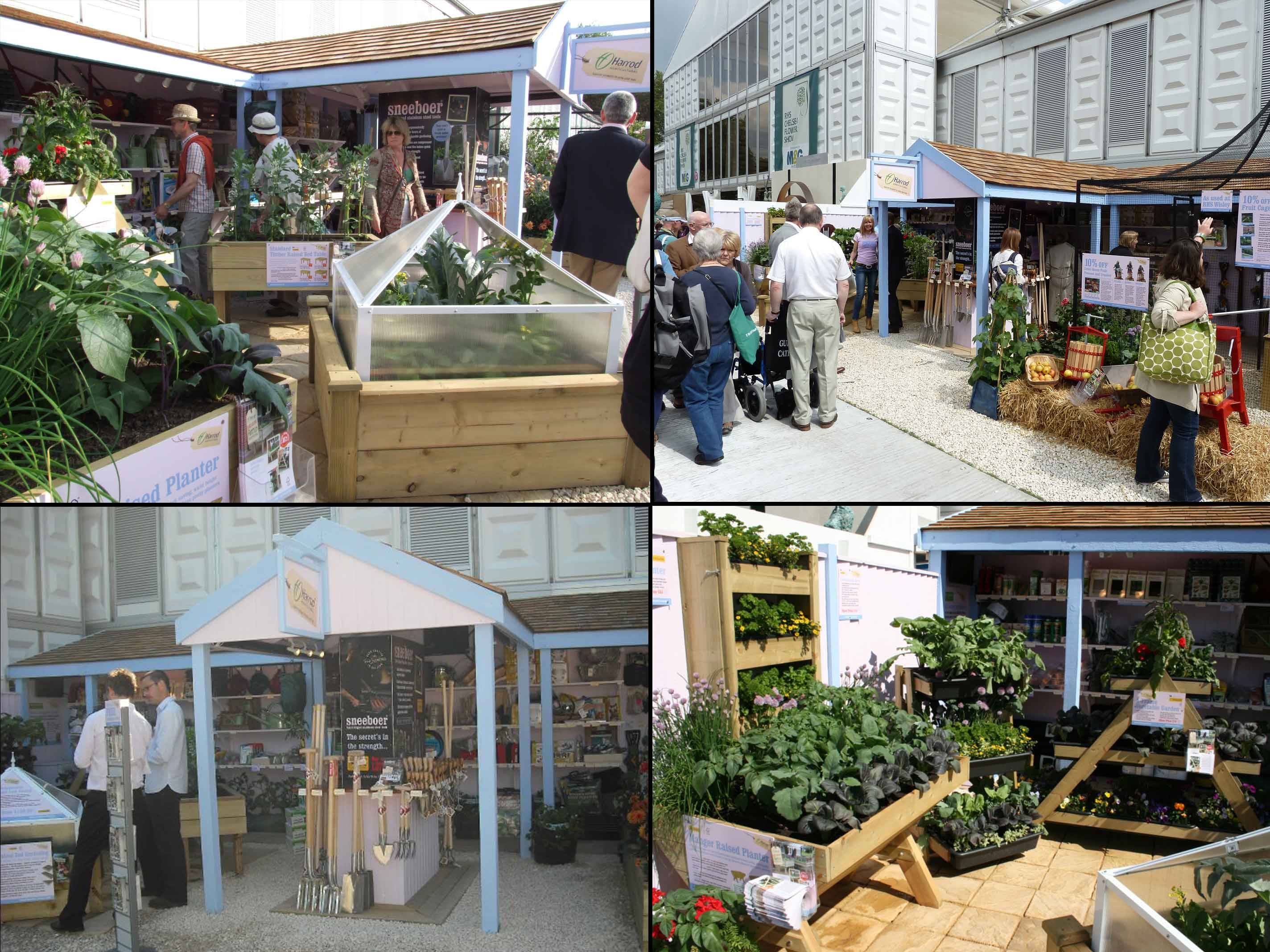 In 2011 we introduced our Garden Arches and Pergolas to the Chelsea crowds. Our large Gothic Pergola was star of the show creating a stunning walkway and entrance onto the stand. The trough planters, ladder planters and raised beds continued to get a lot of attention. Our peak roof cage also looked fantastic and gets lot of interest every year!

We finally solved the storage issues with shelving at the back of the stand for all the products - it saved a lot of backwards and forwards to the car park for stock - and no more dangerous balancing of Sneeboer Tools on a sack trolley!

2012 was a momentous year for us winning the much coveted RHS Chelsea Flower Show Garden Product of the Year! Our Slot & Lock Frames were the worthy recipient. Developed inhouse this ingenious system secures aluminium tubing using connectors which can be securely locked in place. This is perfect for creating sturdy vegetable cages which when covered in netting provides great protection for plants. The increased attention at the show for this innovative new product was far beyond expectations and these Slot & Lock cages have now gone on to become one of our best selling cages.

2010 also saw a bit of a revamp for the stand. The shop area was removed to focus more heavily on our garden structures. Garden Arches and Pergolas became the main focus on the stand and the finished result was fantastic.

Jaap Sneeboer went off to pastures new - well his own stand about 50 yards away! He had a great show and now has his own stand every year!

2013 was the 100th year of the RHS Chelsea Flower Show and it was another great year for Harrod Horticultural. The stand looked amazing with our new lattice arches and obelisks on display. We also launched our new garden bench and was our first foray into the world of garden funiture.

We received a Certificate of Merit for the Stand which is awarded to trade stands for exceptional presentation and also takes into account the quality of the planting. The box hedging looked great (although required a lot of trimming!!) and the plants trailing over the arches had a lot of admiring glances.

Again the weather could have been a bit better so we were grateful for the covered gazebo on the stand - we also managed to sell this to a customer during the show! 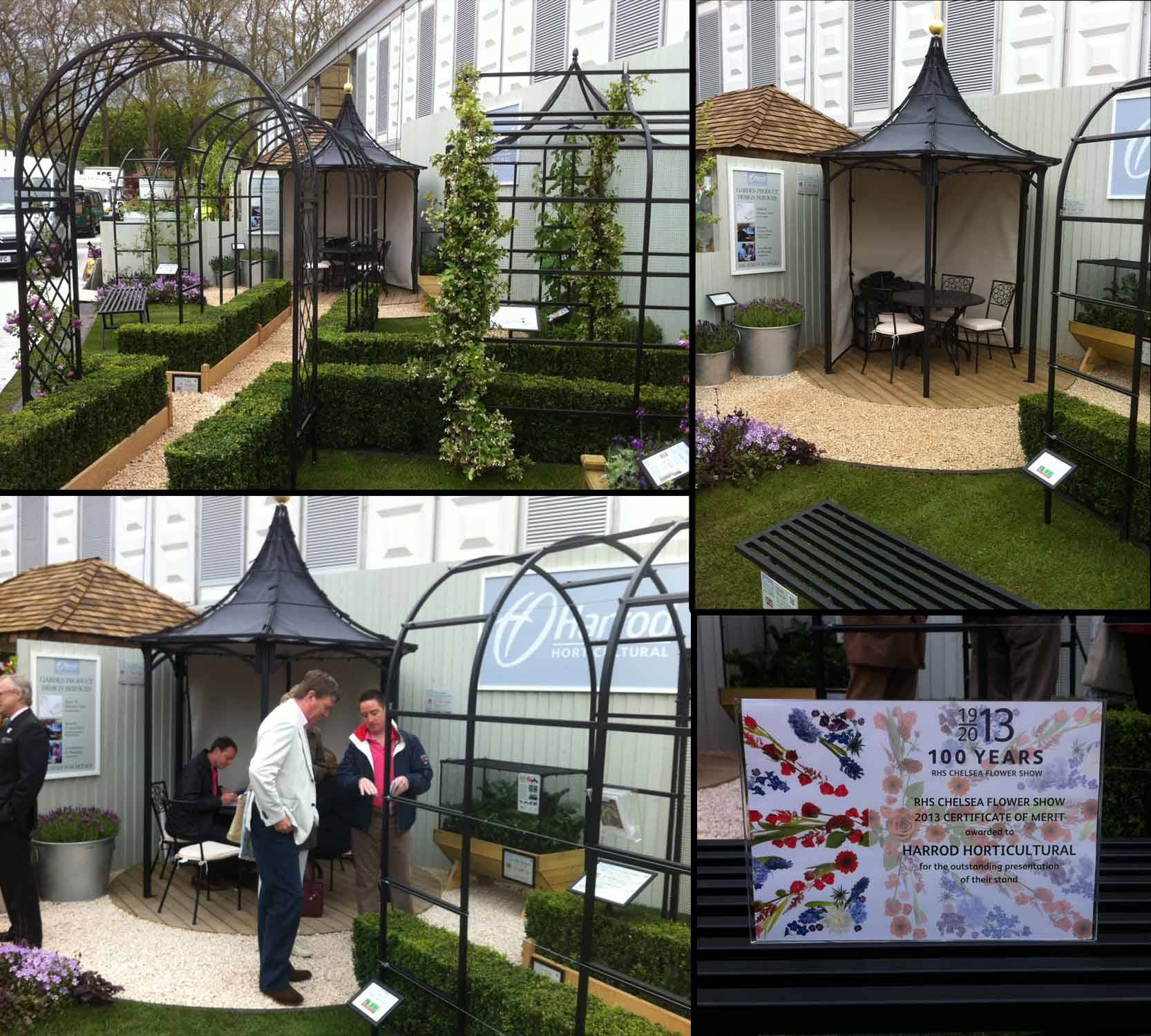 In 2014 we moved location having been in our last location for 9 years and were really pleased with our new home. Royal Hospital Way is a very prestigious location in amongst some of the show gardens. Straightaway we noticed the difference in footfall on the stand often struggling to cope with all the questions from the customers on the stand.

2014 was also a great year because we won RHS Chelsea Product of the Year for the 2nd time in 3 years! Our innovative Stormproof Clip for our vegetable cages scooped the award and received loads of attention throughout Chelsea week. This ingenious little clip allows netting to detach from the vegetable cage framework during very high winds so that the cage framework doesn't get damaged.

We also introduced coloured obelisks and arches to the range in this year which were hugely popular. Our new Greenhouse was also featured on the stand, whcih also offered some welcome shade during a very hot flower show. The main attention though was for our new plant supports. The trumpet shaped Peony Supports were really popular and I think we all lost count of how times we were asked about this new range. 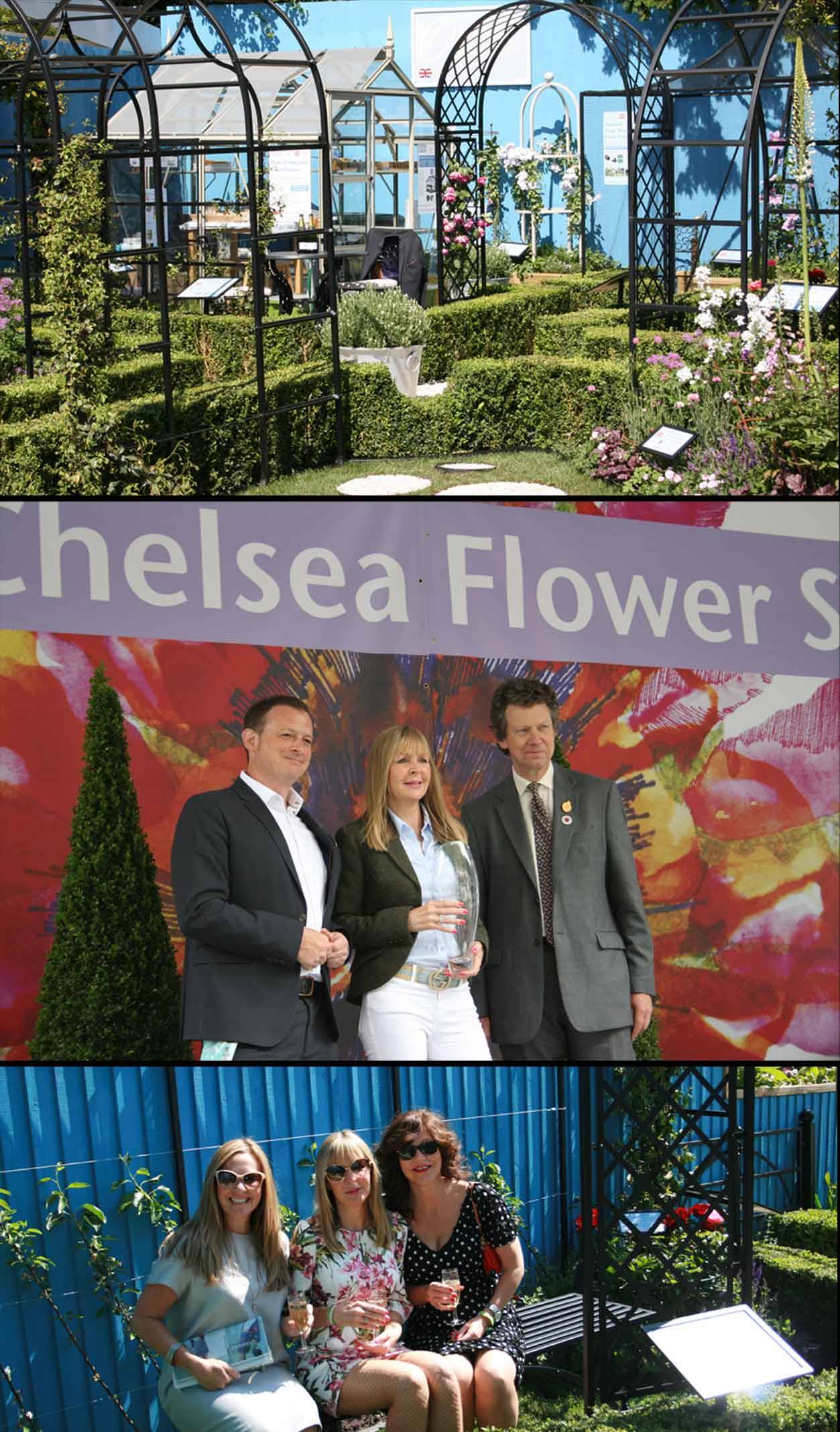 2015 saw us introduce our new Wire arches and Obelisks following a lot of customer feedback. These are much stronger than other versions in the market but more competitively priced than our standard garden arches and obelisks. We also offered these in a rust finish, a first for us, but the untreated steel finish which naturally develops an even rust coating over time was incredibly popular. We extended the finish across our plant supports and couldn't believe how much attention they received.

We also had some garden furniture on the stand to gauge customer reactions. This was a very high end prototype and got some really positive feedback on the furniture.

Our new Contemporary Pergola provided the backdrop to the stand and also provided some very welcome shelter on the stand from the sun and occasional shower!

The stand in 2016 was nothing short of stunning. The Feature obelisk in the centre of the stand with hand painted gold leaf orb was an amazing centrepiece. The planting was also exceptional with some beautiful varieties of climbing plants incorporated into the scheme.

The show was the first outing for our new garden furniture which got some great feedback from customers with lots of comments about how comfortable it was.

The garden structures were again the star of the show with our new ellipse arch dominating the stand along with all our arches in different colours and styles. Another superbly successful show for us....roll on 2017! 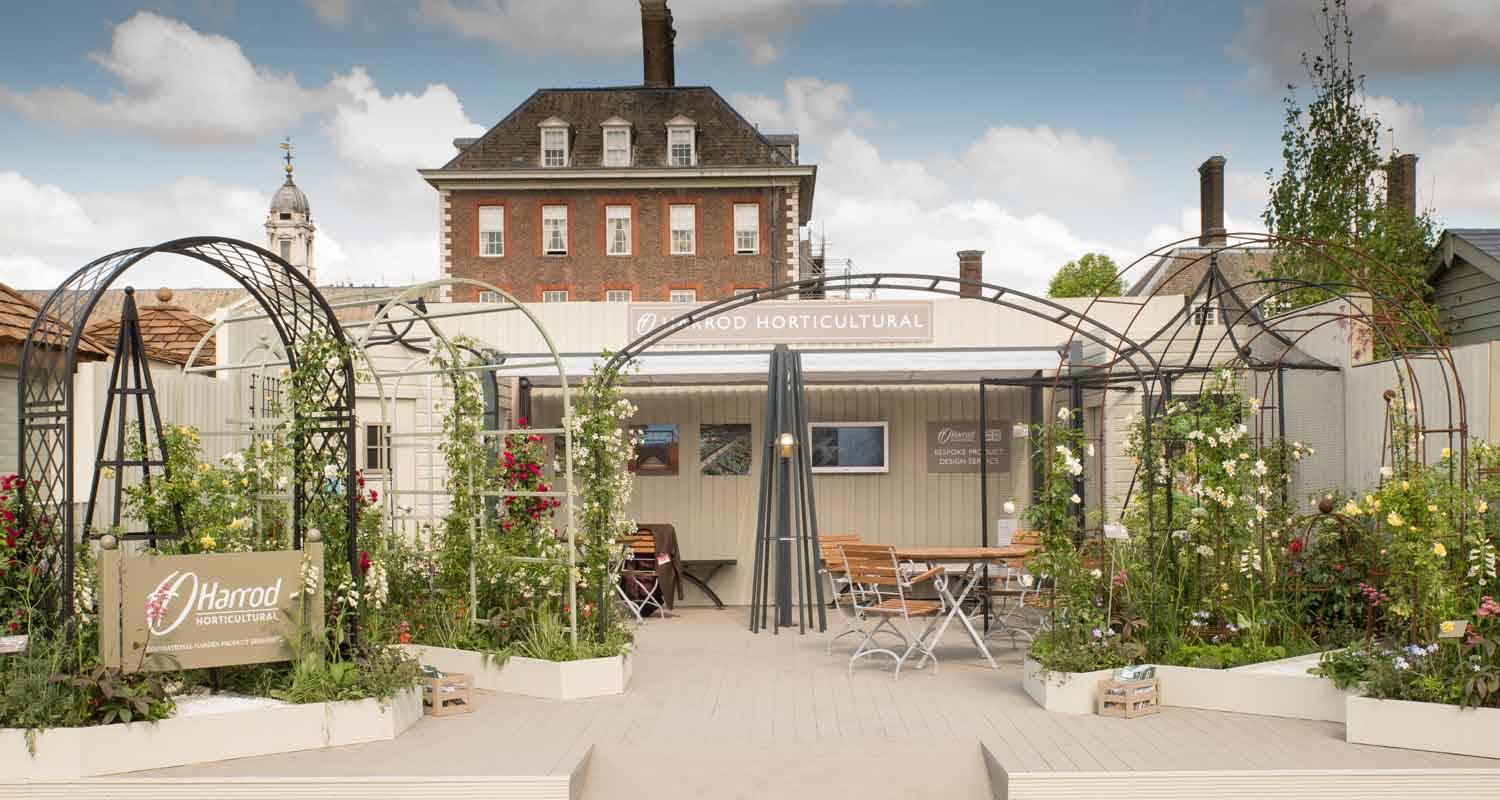