It has been an unusually mild January this year and has caused many of the plants to act un-characteristically for the time of year. Some plants that should still be dormant are starting to show life and we even have rhododendrons coming into flower. We have had a couple of hard frosts but not the continuous frosty mornings that you would normally expect this time of year. 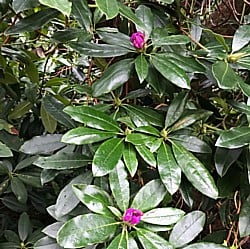 As gardeners we have to adapt to what mother nature offers us and keep a close eye on our plants and give them what they actually require which is not always at the time the books say it should be done.

Our broad beans that would normally be left in the cold frame until planting out have just got too big for it so these have had to be moved to the greenhouse.  We sown these in root trainers which again would normally be sufficient to support them until they are ready to be planted out but this year we have had to re-pot them and give them cane supports because they have just got too big to be left. Hopefully this will mean they will crop very well this year.

The strawberries have started growing again with lots of new leaves being formed, we wouldn’t expect this much growth in January, so they have had some early attention and

a little feed of blood fish and bone to support the new growth and a layer of strulch over the bed which will help to protect them if the temperatures do suddenly dip. Because of all the new growth in the garden we are watching the weather forecast closely and if we do get a very cold snap we will add some winter fleece protection to protect the plants.

We have set up the heated propagator in the greenhouse this month and started sowing this growing seasons produce. February to March are the busiest sowing times but a few have already been started. We have sown chilli pepper de bresse and cauliflower goodman. The cauliflowers have sprouted up quickly but the chillies are yet to show. We will give them a few more days but to be sure we will probably sow some more as it has been a little while now. 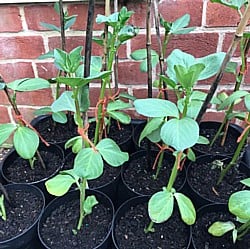 The new runner bean trench has been dug, we moved the bean frame from where it was cited into a new area that will give them more room. The peas are to be grown on the site of the first trench and it will be interesting to see if this improves the pea crop this year. We had very few peas last year however, we still think the squirrels had quite a few of them.

This year we have decided to use organic chicken manure pellets to feed the soil for several reasons. Firstly last year’s manure wasn’t really rotted well enough and we also had a lot of stray weeds and grasses growing throughout the plot because of undigested seeds.  Hopefully the pelleted fertiliser will stop this and means we can get a more even coverage over the plot. These are much easier and lighter to work with and the nutrient load is consistent throughout every pellet.  We have used these before and have always had good results and we have found them to be a very good cost-effective way to feed the soil. They are also good for sites that are difficult to access which ours is.

The apple and pear trees have had their yearly prune, the pear tree had become a little out of shape so it has had a harder prune than what we would normally do but it looks much better for it.

We have still been harvesting well this month. We have had Brussel sprouts, parsnips, leeks, spinach and celeriac all grace our dinner plates. 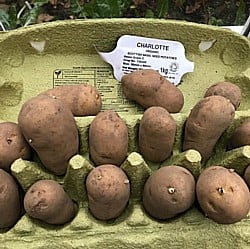 New life has started to appear in the greenhouse, we have sown cauliflower and chilli peppers in the heated propagator and the broad beans are growing well. We have laid out all of the potatoes for chitting, in egg boxes and these are starting to sprout.

Our winter cabbages are still growing well under the winter fleece protection and have had a feed of liquid seaweed We have also had to put some organic slug killer pellets around them as the mild weather hasn’t only just had an impact on plant life but has brought the slugs and snails out early too.

The sweet peas in the cold frame have also had a growth spurt and have had the tops pinched out this week but will soon be too big for the cold frame and will have to be moved into the greenhouse.