A month of four seasons

Well October has been a month of four seasons in one day. We started the month with still warm and occasional hot days and still watering the kitchen garden on a regular basis.  There were aubergines, peppers and the last of the tomatoes growing in the greenhouse, outside runner beans and french beans were still growing and having a last burst at producing. By the end of the month the temperature had dropped drastically and the garden was becoming empty of the lovely summer produce and the leeks and parsnips were fattening up for the winter dinner table.

Unfortunately because of the warm weather our Brussel sprouts succumbed to whitefly as we did not cover them with insect mesh netting this year so we have been spraying them with a chilli and garlic water spray weekly to try to control this. Hopefully, now the temperature has dropped the whitefly will die off and next year we will also interplant the sprouts with marigolds, the smell of which should help deter the whitefly from settling in again.

During this month it has mainly been the clearing out of the summer producing plants and planting out garlic and onions for the spring.  The garlic this year has been planted into a manger planter and covered with a mulch to deter the birds from pulling them out as soon as any green shoots appear.  The shallots will be covered with the same mulch but these have been started off first in the greenhouse.  The savoy cabbages and cauliflowers are shooting ahead now the days have become cooler and we are at last having the much-needed rain. 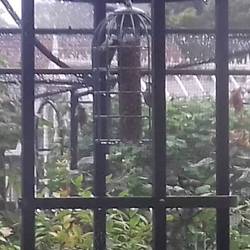 The trees are dropping their leaves in large amounts especially as 'storm season' is upon us and the strong winds are helping them fall even faster.  When the days have been dry, I have been out with my trusty sneeboer leaf rake and wheelbarrow to keep the paths and flower beds clear.  It is quite an enjoyable job when the sun is out and there are lovely blue skies above us.

The birds have also sensed the change in the seasons and are more actively looking for food.  As I'm writing this blog the nut bird feeder is regularly being visited by various members of the tit family, so this week we will be giving the other bird feeders a good clean before stocking them up for the colder weather ahead. As food supplies begin to dwindle, our feather friends appreciate a regular supply of food. They will also be looking for shelter too so it is a really good time to be putting up nesting boxes, or cleaning out existing ones.  If you live in an area where there is a lot of squirrels it is good idea to buy squirrel proof bird feeders.