Spring still feels as far away as ever.

As February draws to a close, the Spring still feels as far away as ever. Despite a handful of sunny, warm days, the month has been mostly cold and grey. Storm Doris made her presence felt by taking down a tree in the surrounding gardens but left the Kitchen Garden largely unscathed apart from a few scattered fir cones and twigs.

When the milder weather has appeared, it has brought with it a flurry of activity. Having been unable to work on frozen soil for so long through the winter, we have managed to get out with the spade and start some much-needed digging. Early in the month a local farmer delivered us a huge pile of well-rotted manure and we spent a day distributing it straight onto the main beds before storing the rest in a vacant compost bin that we keep especially for it. We certainly had no difficulty keeping warm that day! As I write this, we still have plenty of digging to do. On the farms surrounding our garden, tractors have just begun to appear in the fields and I always use them as a guide as to when we should be doing the same; so the spades are out and the digging can begin in earnest.

As well as digging the main beds, we also like to dig over the soil in our raised beds at this time of year. Raised beds, on the whole, don’t need to be dug. A good mulch of organic matter or compost to improve the soil and keep it fertile would normally be enough. However, in Stephanie’s Kitchen Garden, we are surrounded by yew hedges and huge rhododendrons that like to send their roots searching for juicy fertile soil. A good dig over once or twice a year keeps them in check.

The greenhouse has been a hive of industry this month. Our seeds sown in January are now good sized little plants and these have been potted on. We have been sowing a lot more seeds including sweet peppers, spinach, rocket, beetroot, peas, sweet peas and leeks. The heated propagator is full to bursting and the back wall of the greenhouse, where our tomatoes grow in the summer, is currently home to tray after tray of plants and seedlings on temporary shelving. The greenhouse is also home to overwintering frost tender plants such as aeoniums and pelargoniums.   There is hardly a square inch of staging left unoccupied at the moment. Our broad bean plants have just been moved to the cold frame ready for planting out next month.

Outside we have made our first sowing of parsnip seeds. We normally start these off with an initial sowing in early February, but this year has been too cold. Parsnips take a good six weeks to germinate, so I like to make a note in my diary to check them and re-sow into any gaps. At the end of February, we have made our first outdoor sowing of carrots and also sowed leeks into a seed bed.

Our garlic is looking very healthy as we head into spring and this month we treated it to a good dusting of woodash from the house fires, to help prevent rust later in the season. Sulphate of Potash does the same job if you do not have access to wood ash. The ash has also been spread around the base of all our fruit trees and bushes.   We’ve also been recycling the kitchen waste from the house by adding it to our runner bean trench. It is filling up well and will soon be covered over with soil to rot down ready for planting in late spring.

The rhubarb bed is now home to pink buds and tiny leaves emerging from the soil, and earlier in the month we covered two crowns with rhubarb forcers. I loved forced rhubarb as, not only is it delicious, it is also one of the first crops to be harvested in the year. I can’t wait! Amongst the rhubarb crowns, just outside the potting shed, we have a soil thermometer placed in the ground. This is checked daily to monitor the warmth of the soil. As soon as the thermometer hits a steady temperature of 6 degrees, it will be time for the first application of nemaslug to the garden. We have already pre-ordered ours to be delivered at regular intervals throughout the growing season. We have been using this for several years now and rarely have a significant slug problem. I don’t like to share my rhubarb with slugs or snails! 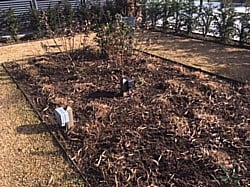 In the wider garden we have been busy cutting back ornamental grasses and perennials that were left for winter seed heads. After cutting back, we divided and replanted perennials that have grown a little large for their space. As a final touch, they were mulched with our special mix of leaf mould and manure. There are tulip bulbs emerging from the soil in great numbers and we have had to work carefully to make sure they are not damaged.

Around the garden snow drops and narcissus have at last begun to flower, much later than we would normally expect and hellebores are in bloom long past Christmas. Like the gardeners, it seems the spring flowers have been reluctant to emerge into the cold arctic weather of the past couple of months. Hopefully the coming weeks will see the sun put in more appearances than of late bringing with it warmer days in the garden.

Here are some of the jobs we’ve got planned for March in Stephanie’s Kitchen Garden:

We’re always here to offer help and support. Go to the Ask the Expert section on our website and email horticultural advisor Jo Blackwell with your queries and she’ll do her best to help.

We’re busy tweeting about all things Harrod Horticultural – what we’re doing, special offers, gardening tips and advice and you can always use Twitter or Facebook to get in touch with us as well. With our webteam manning the Tweet desks and Facebook site, you can be sure you will get the best service we can offer.

Our 108 page catalogue is out now and packed full of gardening ideas and products to solve the problems every gardener faces, plus plenty more seasonal ideas for harvesting, storage and preserving.