February always signals the start of the new growing year for us in the Kitchen Garden, despite the fact that we already have some seedlings growing in the heated propagator and overwintering crops both inside and outside the greenhouse.  This week we will be sowing rocket, spinach and chard in seed trays in the greenhouse.  We will also be sowing peas in rootrainers which can be grown on for planting outside or eaten as delicious pea shoots in salads.

Our seed potatoes and shallot sets have arrived arrived, the potatoes are in seed trays in a cool light place to start them chitting. This is always a satisfying job as it is a sign that we are heading out of winter; even the sight of them nestled in their trays gives us a feeling of spring! The shallot sets too are being started off in seed trays until they have rooted and are showing green shoots at the top. They will then be planted out into the main beds and covered with fleece until the worst of the winter weather is behind us.

Elsewhere in the garden, it is time to climb the ladders armed with our secateurs to give the wisteria plants their first pruning of the year. Back in the sunny hot days of August, we pruned the new whippy stems back to five leaves, tying in those that we wanted to keep to extend the plant. Now it is time to further prune those stems to three buds. This will help encourage flowering as well as tidying up the plant. We have a lot of wisteria here so it is a long job, but it is a labour of love as we are very proud of our wisteria and hold it in great affection. Hopefully it will replay us for our efforts with a stunning display in late Spring. 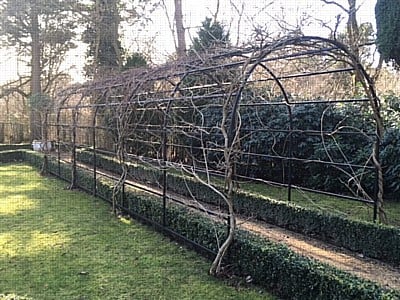