Which obelisks are suitable for climbing roses

We are great obelisk gardeners and have a number of competitor obelisks going strong, some a bit flaky by now. However when you introduced your obelisks we had two and then two more as they are far superior to the competitor ones and are sturdier and easier to erect ! We have David Austin hybrid roses trained up them and they are now in flower.

this support and we are thrilled by the display this year.

Two views of 'Strawberry Hill' rose against a wall in the

front garden. Again it flopped around, finished up in

the yew tree etc until I gave it an obelisk last year.

A view of 'Buttercup' rose against the back fence on a raised bed in the back garden. 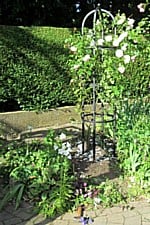 Two views of 'Gentle Hermione' rose before and

after! The obelisk arrived on the 26th June. On

the 27th June I erected the obelisk, put it in

place, pruned the rose very heavily to finish up

with stems that I could tie in to the obelisk.

There is therefore much less flower than in the

first photo but next year it will look much more

Angel' roses from David Austin. This a very

beautiful and vigorous rose, that outgrows its

ability to support its own growth. The first one is

five years old and is sited in the woodland walk,

where it is competing for light and very tall, but

falling all over the place! The second one, three

years old, has outgrown a small flimsy obelisk and

is now much more secure on its new obelisk. I have

given it clematis 'Niobe' as a companion - you can

just see a flower or two at the bottom, but it will

of course grow up and mix in with the rose in

Many thanks to Mr Theobald, Nottinghamshire for this case study.