Spring has arrived to the Kitchen Garden

Finally, the digging has finished in the kitchen garden.  The vegetable plots have now been double dug as the manure we received sadly did not break down as as quickly as we had hoped.

The soil has now been raked and is ready for this year’s vegetables.  The onions that were started in the greenhouse have now been planted out, we have also added a row that had not been started in the greenhouse.  The broad beans were next to be planted, stakes in place, as they have been rapidly growing in the greenhouse.  A wire fence has been put around the broad beans to save them from being dined on by the mice.  The winter lettuces have been planted outside under mini cloche tunnels and are looking very healthy; hopefully in a couple of weeks we may have fresh lettuce from the garden. We have now started harvesting the pink, tender stems of some early forced rhubarb. 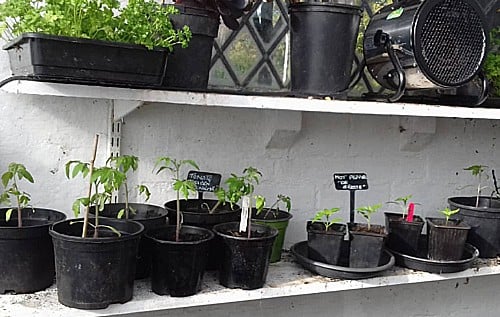 In the greenhouse, seeds that have been sown are shooting up in every seed tray and pot. The broccoli, brussel sprouts, aubergine, celery and celeriac have been moved into an unheated propagator to free up space so more seeds can be sown.  The tomato plants that have been potted on can now be moved into the raised border bed in pots.  Each tomato plant will be given a plant halo collar so watering is more effective and easier.  The greenhouse heater has remained on as we are still experiencing some cold nights. 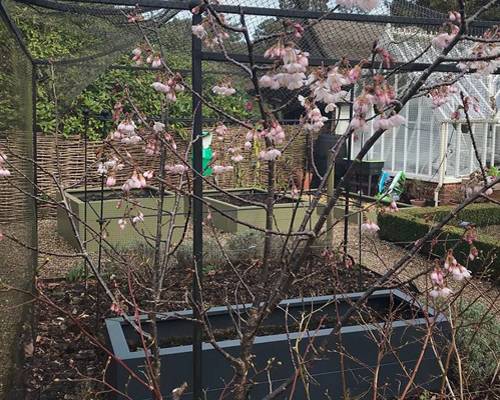 All the fruit trees are now in some stage of flowering so if it hasn’t rained for several days, they will appreciate watering and water from water butts is much more beneficial.I n the other areas of the gardens, time has come for the plant supports to go back on those plants that had them removed before winter.  The peonies are starting to poke above ground so each plant will have a circular trumpet support placed over the top.  Of course, the one job in the garden that is constant is hoeing.  Get on top of the weeds now before they flower and seed and hopefully, they should be easier to control throughout the year.