Snow arrives in the Kitchen Garden

Well the first month of this year has been a real mixture of weather.  It started with rain, wind and frosts then, as the month marched on, the temperatures really started to drop but none of the white stuff.  Some weeks on I began to wonder if we were going to see the sun again then, as the month ended the snow arrived, but not a lot, and very, very cold temperatures. At least it gave me the chance to weed and clear around the various gardens and given me the opportunity to see where spaces have appeared in the borders and what will need filling once spring arrives. 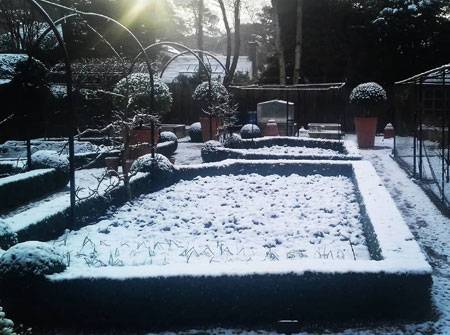 One major job for January was ordering a fresh well-rotted supply of organic farmyard manure.  A few tons arrived on a Monday morning, so wheelbarrows and spades at the ready and time to move it over to the kitchen garden.  By the end of the day about 50 barrows had been spread over the main beds and the raised beds in the kitchen garden and the remainder stored to be spread around the flower borders at a later date.  So far the manure has been spread across the top of the soil allowing the weather to break it down and also to keep the ground underneath warm.  Once we have some dry weather this will be dug in and the bed that the brassicas are to be grown in will have a top dressing of lime.  The soil is very acid and this can cause problems with clubroot in brassicas. 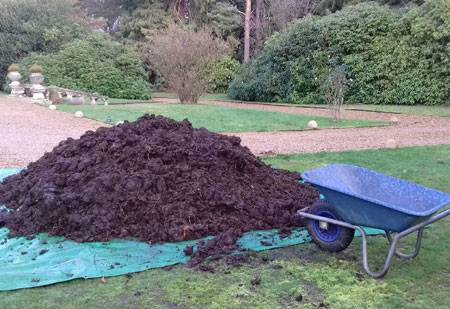 Some of the manure has been placed in the runner bean trenches which have also been filled with food waste from the kitchen.  The fruit bushes in our fruit cage are also enjoying the arrival of the manure and the raspberries have had a thick layer placed around the base.  The blueberries are all grown in pots and they prefer to have an inch or so of their compost removed and replaced with fresh ericaceous compost, this helps maintain the acidity levels in the soil and adds nutrients for the year ahead.

In the greenhouse it was time to start sowing seeds in our large heated geopod propagator, the seeds have already started to shoot; tomatoes, chillies and carrots.  It really is exciting to see the tiny green shoots appearing in the trays. I will also be sowing brussel sprouts, lettuce and broccoli shortly. 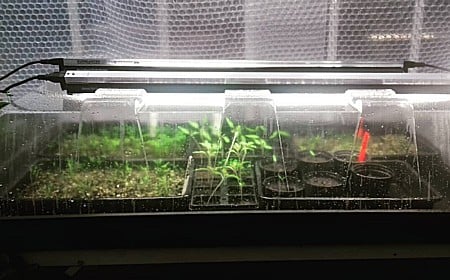 At the beginning of the month we received a delivery of our favourite seed potatoes, Desiree and Charlotte.  I have kept them in the box in the dark, checking on them weekly and now we are at the end of the month I shall be laying them out in egg boxes to start them chitting. ‘Eyes’ pointing upward, the trays have been placed in the greenhouse in a cool but light area until they are ready for planting in a couple of months’ time.

Jobs planned for February in the Kitchen Garden: