Another month of mixed weather

The winter solstice was a very wet and grey day with only an occasional glimpse of the sun, but for us gardeners we know that this means the days will slowly start to get longer now.  December has also been a month of mixed weather and varying temperatures, one day in double figures, the next in a single figure with a crisp frost.  Parts of the country have seen inches of snow but here on the Suffolk coast the nearest we have seen is sleet and freezing rain.

In between the rain and several storms that have crashed their way across the country, there has been plenty of jobs to keep us busy in the garden.  The trees have continued to shed their leaves, the oak being the last to drop, so this has kept us busy clearing the paths and borders.

I finally got to position the runner bean frame in place for next years crop and then spent a few hours digging a trench on both sides of the frame, 18 inches deep and a spades width.  This will be filled over a couple of months with fruit and veg waste from the kitchen, layering it with a little of the soil that was removed until it reaches the top of the trenches.  This will provide much needed food for the hungry runner beans as the waste composts down. 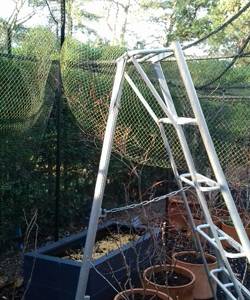 Another job this month was to take down the fruit cage roof netting.  This allows birds to come into the cage and remove any bugs that might cause disease to the fruit bushes and also will prevent any damage to the frame from any heavy snowfall.  It takes a couple of hours to remove all the quick release tie wraps, numb cold fingers at the end and a lot of up and down the step ladder but it is an essential job to do.

The potting shed and other storage sheds have had their annual tidy up and the seed tins have been sorted.  The seed order for 2019 has been placed and with the New Year approaching there is a sense of excitement as one-year ends and a new one begins. It’s a good opportunity to batten down the hatches and relax by the fire as you dream of how next years growing season could be even better.

With the hot summer we had this year and the lack of rain, now is a good time to think about improving garden watering systems. Is there room for another water butt or two?  Could more soaker hose kits be added to the vegetable plots.  If you haven’t already completed your garden plans yet, adding a click and drip irrigation kit could be the answer.  Hopefully, fingers crossed, it won’t be quite so dry next year but in case it is now is a good time to prepare.

The kitchen garden does look rather bare this winter as a few of our winter crops have failed, but it has given us the opportunity to mulch the bare soil with some well-rotted manure or home-made compost.  To avoid treading the soil down too much, the manure is wheel barrowed to where it is needed and then standing only on the paths it is spread over the plots with a rake.  This will be broken down over the next couple of months by the worms and the rain, ready to be dug in once the spring arrives.

Well I hope everybody had a wonderful Christmas and best wishes for the New Year and here’s to a bountiful kitchen garden in 2019.

Jobs that I have planned for January in the Kitchen Garden: