Rain at last in the Kitchen Garden

For the first time in a long time my first priority wasn’t more watering when I went out to the kitchen garden this morning.  Yesterday we had an inch of rain which has left the garden feeling refreshed and the plants have lifted their drooping heads and you can almost hear them growing.

At last we can get on with some of the jobs that have been neglected while we spent our time watering.  We have lots of little vegetable plants ready to be planted out for winter cropping that we would normally have had in the ground by now but have kept them in their trays and close to taps rather than submitting them to scorched dry soil.

This week we will be planting out Kale, cabbages, cauliflower and leeks, they will all be planted into the gaps that have now become available in the garden.  The long-term weather prediction is for good weather well into October so they should have time to put on some good growth before the winter. 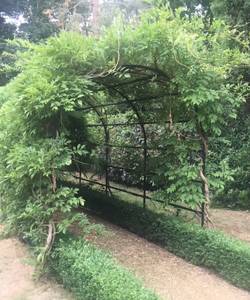 We also have lots of pruning to get on with including our many box hedges.  Since our hedges were hit by the dreaded blight a few years ago so we have switched our clipping from the traditional June to August and it has been a success.

The hedges are well recovered and looking lush and green, clipping them in scorching heat and sunshine would be a disaster as it would stress the plants out and leave them vulnerable to further blight attacks.  Hopefully we will have some overcast days ahead where we can get on with returning them to crisp neat hedges.

Elsewhere in the garden our wisterias are in need of a prune.  They have put on huge amounts of growth this year and are now looking decidedly woolly!  Now is the time to shorten all the new growth, tying some in to create new branches where required.   This job is a particular favourite of mine as it leaves a neat and tidy finish.