Considered by many to be the king among vegetables, the humble potato has an ancient and honourable lineage. Boiled, mashed, baked or roasted, there are a number of ways to cook potatoes, which makes them one of the most versatile vegetables in the world.

Potatoes are classified as either earlies or maincrops. Early potatoes are ready to harvest far earlier than maincrops and often known as ‘new potatoes’. Maincrop potatoes are in the ground a lot longer, they have a better yield and produce far bigger potatoes or tubers.

Did you know? Potatoes are used to make many alcoholic beverages. 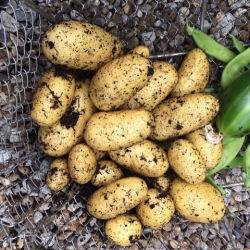 Pick your varieties
Whether you’re not sure where to begin or you’re looking to narrow down your final selection of tasty cultivators, take a look at our potato roundup below:

Desiree
A firm favourite with rosy skin and pale-yellow flesh – a very versatile maincrop potato. Versatile for all cooking purposes including roasting and baking.

Sowing
It is a key with earlies and also a good idea with maincrop to chit the seed potatoes prior to planting. This just means to let them start sprouting shoots. The seed potatoes can be stood up in egg boxes or similar, with the end with the most eyes (little indents with buds in them) facing upwards. Store in a light, frost-free place until the shoots are about 3cm (1 inch long). They are then ready to be planted.

Planting
Planting times vary considerably depending on soil and weather conditions. The traditional way to plant seed potatoes is to dig a narrow trench to a depth of about 10cm (4”) and place the potatoes into the soil with the rose end pointing up. Fill the trench with soil, covering the potatoes, and, if required, scatter potato fertiliser along the top of the trench.

Ensure seed potatoes are spaced 30cm (1ft) apart for earlies in rows 60cm (2ft) apart and for maincrop varieties place the tubers 37cm (15”) apart in rows 75cm (30”) apart. The early shoots are susceptible to frost damage, so try to plant in a sunny spot and avoid frost pockets.

When the stems are around 23cm (9”) high, the plants need to be earthed up, carefully drawing soil up to the stems and covering to produce a flat-topped ridge about 15cm (6”). This is done to protect the early foliage from frost damage and protect new potatoes from turning green due to sunlight, which makes the tubers poisonous.

Harvesting
First early potatoes should be ready to harvest in June and July, second earlies in July and August with maincrops from late August through October.

It is best to set the potatoes out in a dry, well ventilated position for a few hours, just to dry the skin. These can then be stored in hessian potato sacks in a dark, cool, frost-free place. Don’t store potatoes in polyethene bags as this causes them to sweat, which can result in rotting.

Other uses for potatoes

Potatoes are often a staple of a home-grown diet. Most people love them and everyone has a favourite way of preparing or cooking them. But what you may not know about potatoes is that they can also come in handy in a range of other ways.

Greenhouse fog. Not only is it annoying when the glass in a greenhouse fogs, but it can also pose a problem for the plants/crops inside. Cut a potato in half and rub the cut edges on the glass of your greenhouse. It will miraculously stop any fog from forming.

Craft stamps. Potatoes make excellent stamps. Carve a raw potato to create your own unique stamp designs, dip them into paint and then press onto paper.

Rust free tools. Cut a raw potato in half and use it to clean rust off your gardening tools. The potato’s acid content works to dissolve the rust. Sprinkle on some salt for even more cleaning power.

Homemade crisps. No need to deep fry delicious potatoes to create crisps. They taste just as yummy baked in the oven, without the grease. Just slice your potatoes thin, toss them with a bit of oil, arrange them on a baking tray and sprinkle lightly with salt. Bake until golden brown.