A Change in the weather

Well September started as dry as August and we were still watering every day but come the end of the month it was the opposite and we were asking ourselves when the rain was going to stop, but we must not complain after having had months of hot dry weather. 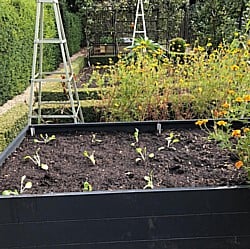 The change in weather has meant that in the kitchen garden the summer vegetables are now nearing the end of growth so they will be lifted and composted and in their place winter vegetables will be planted, spinach, pak choi and other spring brassicas.  The runner beans which have given us a fantastic harvest this year considering the lack of rain, are slowing down and no longer bearing any new beans so they will be dug up soon.

The apples are being harvested but this year has been a very poor harvest for the cookers, one tree only produced a dozen or so apples if that.  The eating apples have produced an okay harvest but they are small.  The pears were also a poor harvest, not that we got many, the squirrels helped themselves to the best. As the beds become clear it is now the time to start thinking about where produce is to be planted next year and what needs adding to the soil once we start digging over.

In the other gardens it has a been a busy month.  The yew hedges have their yearly cut during September so they look pristine for the winter months.  The roses and lavender have been pruned back ready for new growth next year.

The main lawn took the summer badly and after the cedar tree was removed it was in desperate need of attention, so a specialist lawn company have been in.  The area was scarified a couple of time, pre seeder was laid then compost on top and new grass seed was sown on top of that.  With all the rain we have had the last week there is new grass already starting to sprout and the lawn is once again beginning to look healthy.

During the month the temperature started to drop and of course this is like an alarm call for the trees to start dropping their leaves, so battle has once again commenced and leaf rake and wheel barrow are at the ready.