The Kitchen Garden is thriving 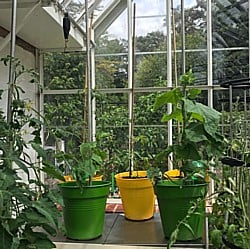 The kitchen garden is thriving and a lot of work has been done, the celery and celeriac have been planted in their final positions and seem to be very happy. The last of the courgette plants have now been planted too and the ones planted a few weeks ago are now flowering so I have started to feed them with Maxicrop Seaweed Plant Food & Growth stimulant. This liquid plant feed based on seaweed extracts is almost guaranteed to give fruit, vegetables, flowers, shrubs and trees a real health boost!

Most of my attention has been in the greenhouse this week as it had got a little bit messy so have been tidying and moving as many plants as possible outside to the cold frame. I blame the cold snap we had earlier in the month delaying a lot of the planting. This has  meant a backlog of plants were waiting to be planted outside and no room for the ones that were to remain inside the greenhouse such as the tomatoes, cucumbers, peppers, chillies and aubergines.

Some much needed space has been made now and the cucumbers are on there training poles and the tomatoes have a little space to breath. There’s still a lot of work to be done before everything is in its final pot and position.

Of course, the weeding and watering continues and although we have had some rain it has been nowhere near enough. The soil remains dry just under the surface and with many of the plants still so young, they have not established themselves yet so regular watering is really important.