The Cordon Tree and Harrod Step Over Support

The cordon tree is something like the gardener’s victory over the tree. Here, the domesticated tree no longer pushes itself self-determined toward the light, but the gardener dictates where it grows with this step over support. 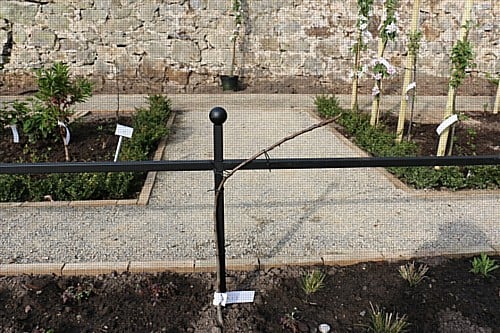 It is not surprising that these very formal, as not to say "dictatorial" type of fruit tree training was practiced for the first time on a large scale by Andre Le Notre, the gardener of the absolutist Louis XIV, in Potager by Versailles. This can be of course also regarded as a violation of nature, but actually it is a cultural achievement and unfortunately an almost forgotten horticultural design element. The cordon tree shows - when used properly - the direction of the garden, it directs and guides. It is a plant and a do-not-step-over sign at the same time. One gladly accepts that it also blooms and bears fruit!

In Ippenburg, garden architects Nicole Fischer and Daniel Auderset used the cordon tree in the beds upstream the paradise gardens: these beds played the fruit and apple theme before the actual paradise garden. In the cordon tree hedge, all of our 'Paradis' and' Redlove' varieties are planted,and they direct visitors unobtrusively but determined to the intended entrances that lead to the Garden of Eden. Who steps through trees that are flowering and bear fruits? The example shows how elegantly the cordon tree can combine functionality (differentiation, guidance) and aesthetics.

Alone and used in large numbers, the cordon tree almost has an effect that is a little too strict, too naked, too determined. It is a strong resemblance to the handrail of a railing. In our example in Ippenburg, the cordon trees are underplanted with Fruit Friends, the low-growing fruit accompanying perennials that horizontally surround the cordon. This is perhaps the greatest difference to the 19th century, the second wedding of the shaped fruit trees after the 17th century: at that time, strict form was valid; the geometric measurement of nature itself as an aesthetic cultural achievement. Today, we prefer a balance or even counter-play between formality and freedom, between culture and nature.

The correct young plant and the support

As a starting material for the cordon tree, it only needs a one-year-old tree which can be slightly bent. We offer so-called Easy Trees as annual trees, which are outstandingly suitable for this purpose. A support frame with posts and a horizontal steel cable or even a fixed bar at about 40-50 cm high (even higher is possible) can be built in different ways. From the quality English manufacturer Harrod Horticultural we offer stepover support (at www.lubera.com). But of course all variations in do-it-yourself construction are possible. ;-)

The distance between the individual support poles is best chosen according to the desired tree spacing and thus according to the desired length of the cordons, the horizontal cordon branches. The Harrod stepover support has a distance of 150 cm, which seems ideal to me. Gaucher would, however, not have had the same opinion concerning this point. He tends to 2-3 m, which would prevent an overly strong growth that causes the cordon to become too short in his opinion. As a compromise to my great predecessors, I offer the following: anyone who does not want to underplant the cordon tree should consider training a long, 2-3 m cordon. When the cordon tree is underplanted, a shorter distance of 150 cm can be chosen. Maybe we are just more impatient than our predecessors almost 150 years ago: 150 cm are already filled after one year; after 2 years at the latest, the cordon is ready. Greater distances take longer...

Possible types of fruit: apple and pear (and vines)

We can again confidently quote the words of Gaucher: "In the end, however, all fruit genera can be used as cordons, but we recognise only three of which are suitable with success, namely apples, pears and vines." Yes, that is how it still is. And of course apple trees should be grafted on a weak-growing M9 rootstock and pears on a quince rootstock. And here we go again with agreeing with Gaucher: "In most cases (for apples), Paradise grafted trees should be chosen since they show less driving force, come earlier in yield and provide more beautiful and larger fruit than on the other varieties. With Paradise, the Lubera apple cultivars are not meant, but instead the apple rootstock Paradis Jaune de Metz, which is identical to today’s standard M9 rootstock. This had been widely used in the 19th century, also purchased by my grandfather in large wicker baskets from the tree nursery area of the Orléans Loire Valley, more than 30 years before being rediscovered and standardised as M9 in East Malling. 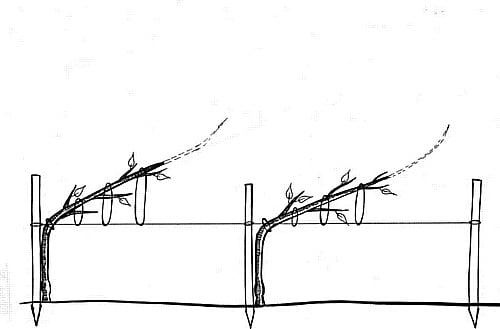 The Lubera Easytree® should be planted to the post and at the height of the wire, the steel cable or the crossbar bent at right angles and also fixed in this position with elastic binding material. However, I recommend, not to tie down the cordon horizontally in the first year, but to leave it at a 30° angle. This way the tree has more tension; more power and juice go towards the desired length and less towards the formation of side shoots that are too strong. After 1 or 2 years, when the desired final length is reached, then the cordon tree can be tied down to the horizontal position. 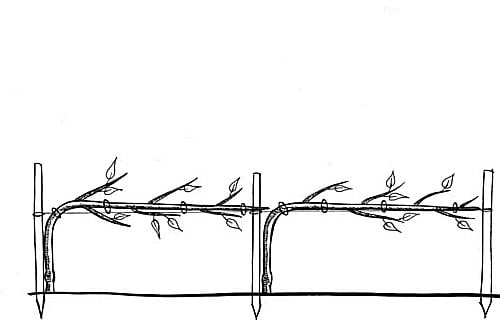 Training is of course needed for pinching. All of the side shoots on the cordon tree that have grown more than 15 - 20 cm should be cut back to this length, in which the tips of the leaves that have not yet completely opened, including the inner tip, the meristem, are pinched with the index finger and thumb. When the side branches sprout again in July/August, the fresh shoots should be pinched back again to the old point of cutting.

Of course, these training tips are especially suitable for smaller and also shorter cordon trees. The effect is startling: the fruit development on the short side starts faster and already in the 2nd year there is a good fruit set, which then in turn weakens the vegetative growth.

Those who are not able to continuously monitor the cordon tree, are better off with the double cut on fruiting wood, which is simple to do: in mid to late June, cut back all the side shoots to 15-20 cm. In March of the following year, consistently cut back all the side shoots again to 15-20 cm. Note: as a rule, do not completely remove a side branch. That would lead to bare spots on the cordon, which is a fruit structural sin that can no longer be undone.

Yes, exactly. That's really all there is to it. Except maybe one more thing: all of these simple measures, but especially cuts on fruiting wood must be done absolutely consistently. This is rather primitive, and this is just how it is to be done. Thinking too much, neglect or fear of cutting only disfigure the cordon tree too fast towards shapelessness.

Blog Article Curtesy of our retailer Lubera in Germany