Seedlings are beginning to shoot 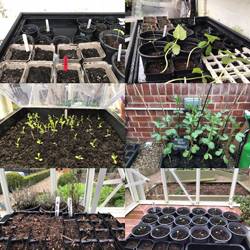 The kitchen garden is quiet at the moment, sprouting broccoli and young cabbages are a few of the vegetables growing but, in the greenhouse, it is a different matter. A variety of seedlings are beginning to shoot. Broad bean plants are climbing for the sky, having been started off in the cold frame and then brought into the greenhouse, mostly because they where too tall and it is still too cold for them to go outside. Cucumbers are taking off in the vitopod heated propagator, alongside chillies and peppers. The different varieties of potatoes are also beginning to grow shoots, not much longer and the earllies will be planted out.

Elsewhere in the gardens new life is beginning to show. Tulips, daffodils and alliums are breaking above the soil and in a month or two we will hopefully have a riot of colour. The yearly job of clearing and cutting back of the wild flower garden has now begun, another satisfying job when finished. Hidden in the wild flowers is ribbons of snowdrops that were planted last year, one or two flowers but plenty of leaves. Hopefully next year the bulbs will have had plenty of time to establish so there will be waves of snowdrop flowers.

It has also been another week of clearing debris caused by Storm Dennis. Not as bad as Ciara but still lots of branches and twigs scattered everywhere. This time only one side of the soft fruit covers was removed. Hopefully this weekend is storm free so we can concentrate on doing more jobs in the gardens that are a priority this time of year.