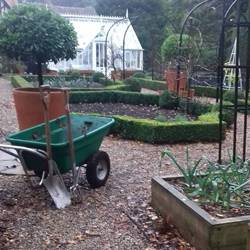 December has arrived, reminding us that Christmas is fast approaching and a new growing year will soon be here. The month arrived quietly but wet and thankfully no snow, just rain and more rain so a lot of the jobs I had already planned for this week have now been moved back into next week.

The leaves are still falling all around the kitchen garden so when given a chance between the showers, the rake and wheelbarrow are out of the shed for yet another tidy up. As it is still strangely mild however, I have been lifting the cloche tunnels from the spinach and lettuce for part of the day and letting them make the most of the beneficial rain. The leeks are certainly enjoying the weather and growing steadily fatter, but we could really do with some frost to make them taste even better.

This week I have mulched around the rhubarb and vegetable beds with some well-rotted leaf mould. It has been over a year composting down and is now a lovely mulch for the garden and looks almost like soil but a lovely golden brown. This mulch will help improve the soil structure, provide a fantastic habitat for soil life, including earthworms and beneficial bacteria and help put back essential nutrients into the beds once it has been dug in. In some places the rhubarb crowns have already started to shoot again so some have been covered with rhubarb forcers to encourage some sweet, early, pink rhubarb next year.

When the rain has forced me back into my potting shed, it has given me the apportunity to have the usual winter tidy up. Left over seeds from this season have been sealed, labelled and stored safely away in seed tins to keep them dry. Pots, seed trays and shelves have been cleaned and all is now organised, ready for the New Year.