Frosty conditions in the Kitchen Garden 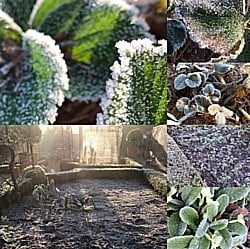 We have had some really frosty conditions in the kitchen garden this week. Which, although looks really pretty has made working the ground quite hard as it has been frozen.

Despite the frost and frozen ground we have started to prepare the brassica bed. Our first job was to harvest the last of the parsnips and leeks out of the bed. The parsnips had grown quite well if a little odd shaped, but they have had to compete with a lot of tree roots.

This year the ground needs to have a really good turning over with our trusty Sneeboer Large Spade  to remove these tree roots. We have started doing this by double digging the bed to break up the roots and adding lime as we went. We have also found a lot of large stones which again will interfere with the root systems of the vegetables so we have been removed the bulk of them too.

We had an awful lot of stray grass and weeds growing throughout the kitchen garden last year. We think that these may have been introduced by the manure we used as they were only present in the kitchen garden.  This year we have decided to try something different; instead of using farmyard manures we are trialling organic chicken manure pellets. In theory should put lots of nitrogen and nutrients back into the soil without adding stones and undigested seeds to the earth. They should also be much easier to distribute throughout the garden and give an even feed to everything; but only time will tell. 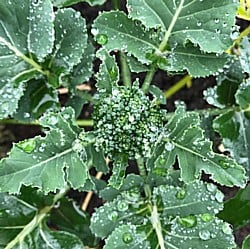 The Brussel sprouts are still providing us with a good harvest and another good helping has been picked this week. We have noticed that the broccoli has just started to form florets, although the plants are still quite small.  The ground is now a little tired as it has supported brassicas for a long season this year and is desperate for some food and a rest.

In the rest of the garden, we have had some visitors in the form of muntjac deer. They have found their way in through a weak part of the main fence, luckily they haven’t done any damage yet! They have just had a look around and had a game of tag with our resident dog who seemed to think the visitors were great fun.