The word “flurry” is best suited to describe recent events in the Kitchen Garden, relating to both the snow which continued to fall, thaw and fall again over Norfolk and the activity inside the greenhouse under the cover of glass.

Unfortunately, this bitter spell of weather has completely put the brakes on construction of the garden, but it has given us a chance to catch up with the important task of propagating numerous types of crops in the anticipation that spring would arrive one day in

the near future. Firstly, we selected leeks and onions, cultivars Alora and Sturon Globe respectively, to complement the garlic - shooting skywards very nicely at present, incidentally – as all are members of the onion family. These seeds were sown into an 84 cell module tray, known as a Combi-Pack Number 1,and part of the Combi-Pack System, an essential selection of trays and small pots for any greenhouse. The module tray sits in a green plastic tray which houses a piece of capillary matting, which, when saturated in water, provides moisture for the roots of seedlings and remains damp for several days. 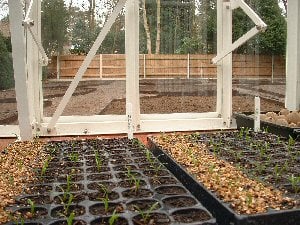 Not content with monitoring our potato chitting experiment/debate, more of which later, we decided to conduct another test with the leek and onion seeds. Two rows of cells were covered in vermiculite (an inert material which is extremely light and therefore offers less resistance to emerging seedlings than compost, and which is also said to help prevent compost from drying out) and we will observe the germination of these seeds in comparison to those with the traditional covering of compost, with interest. Rest assured, any major fluctuations will be recorded here as usual. We have also sown 5 or 6 of the above seeds per cell to try out the multiblock method. The emerging seedlings are not thinned out as normal and are transplanted in their small clumps, hopefully resulting in smaller but perfectly formed plants. Hopefully, in a few months’ time, we will have some images of mini leeks and onions to display.

The vermiculite technique was repeated when sowing the spinach seeds, cultivar Viroflay. Two full module trays were sown and the remaining seeds placed in compost in a standard seed tray , where the emerging seedlings can be pricked out to replace any specimens from the module trays which do not make it.

Possibly the most exciting development during the period under review was the arrival of our heated propagator. This equipment has allowed us to create a mini-climate inside the greenhouse, and therefore germinate seeds which require more heat; indeed, the electric heat mat provided with the propagator is capable of producing a soil temperature of 40 degrees C. However, we, and the tomatoes (cultivars Gardeners’ Delight, Alicante and Beefsteak) and Sweetcorn (Jubilee) currently residing inside the propagator, are quite content with a balmy 20 degrees, controlled by the probe which is part of the kit and monitored with a small propagation thermometer (not included). The tomatoes have been sown into the small 6cm pots which form the Combi Pack Number 2, and the deep rooting seeds of the Sweetcorn will germinate (hopefully) in the larger rootrainer. 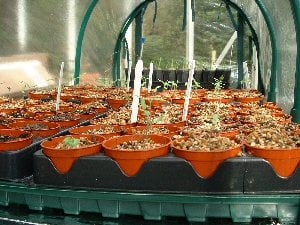 Following the excitement of the propagator arriving, it was back to more mundane tasks as further sowings of broccoli (Bordeaux), brussel sprouts (Groninger) and cauliflower (Snowball) took place, again in the Combi Pack Number 1 module trays, but in a reckless moment, we decided to throw caution to the wind and cover the entire trays with vermiculite.

To cap a period of intensive greenhouse activity, the seeds of artichokes (Green Globe) were also sown in a module tray, and these plants will populate a bed long-term along with the asparagus crowns, which are still to arrive from the seed merchants. Lettuce seeds (Vienna)were also placed in module trays but these were not covered as we have read that some varieties require light to germinate; we sincerely hope that the Vienna is one of these! The excess seeds were placed in small paper pots, made from strips of the local newspaper, and formed with the ingenious paper potter. These little vessels are obviously bio-degradable so after removing the weakest seedlings, the remaining lettuce can be transplanted without suffering any root disturbance. However, more practice in making the pots is certainly required as they differ greatly in size and shape; perhaps a different newspaper is required?!

As promised, we have further news on the great Potato Chitting Debate. A recent inspection revealed that the tubers kept in the dark have produced pale shoots, which are fractionally longer than those shooting from the potatoes in the light. However, in a strange development, the latter tubers have grown shoots which are very dark, almost black in fact – this is usually a sign of frost damage but this is impossible, as the greenhouse fan heater has been set on frostwatch since day one. Perhaps a possibility was too much heat? The max/min thermometer revealed that a sunny day (there was one?) in February had pushed the temperature momentarily to 18 degrees C, and a call to the seed merchants did not result in a definitive explanation. We are currently considering purchasing some more tubers, but we would appreciate any comments and advice as to what has happened to the existing specimens.

We would like to take this opportunity to thank everyone who has contacted us with views, ideas and even recipes for the Kitchen Garden; we hope you will continue to visit us and hopefully point us in the right direction if required, and if you would like further details on any of the products we have been using, please click on the links provided

With a forecast of mild weather to come, which should finally herald the arrival of spring, we hope to have some news on the construction of the Kitchen Garden very shortly.