September here at the Kitchen Garden has been a bumper month for many crops and a disappointment for others as that wet, wet August took its toll.

There has bean no shortage of legumes! We are running out of ideas for courgettes! Tomato sauce in abundance! 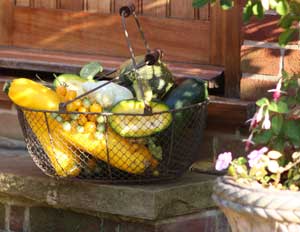 A myriad of potatoes! And some very mysterious veg.

We needed those new natty wire trugs as they have been heaving with the weight of veggies.
Let's hope the Indian summer all the forecasters predict arrives and our beleaguered crops have some sunny respite.

Squashed Hopes?
One of the main crops in need of some warming rays are the squashes.You may remember from Martin's August update that our squash patch is a little on the shady side, it is also in a corner and air does not  readily circulate so all that wet wreaked havoc, but we have enjoyed a great many green and yellow courgettes; the Spaghetti Squash have also come up trumps and we are having to invent new dishes to cope with the glut. Courgette curry any one? Fritters? I have yet to get to grips with marrow based sweet treats though!

The Blue Hubbard Squashes have set lots of fruits. I am admiring them but not cutting until as late as possible as they need to ripen and harden their skins properly, then they will store for over a year! Trust me on this, I have eaten many an ancient squash and as long as you store them right they are still delicious, especially when my partner stuffs and bakes one.

The Kuri's and Butternuts were a bit slow to get going but they are nice plants now and have fruits set, so fingers crossed, and come on sunshine...

I look forward to using the prime position raised beds, for what is one of my favourite crops, next year, but for now I will keep feeding using the liquid Tomato food in a waterbutt connected to a irrigation system and soaker hose. This is the really easy system that I will be using around the garden next year. If the butt's full, pop in the right amount of feed, turn on the tap, and all the plants are fed and watered. Quick and easy to set up too.

Mystery Veg
Earlier in the growing year, having had a wee accident carrying too many pots around the garden, I've realised the value of Stephanie's comments... 'time to use those truggs, Sharon!', I trashed a batch of squash plants just as I was due to plant them out - ARGGH! Having cleared up the mess I resowed with some home-saved Butternut Squash seeds. The plants came up well and I planted them out and very soon had lovely, nice vigorous plants, the fruits of which set quickly - all very good; Stephanie's favourites nice and early in season, I thought. What we got was Squash, but not the ones I envisioned, a funny Futsu-esque ribbed-green/black fellow and a very round attractive speckled 'courgette-like' Squash. (As shown above in the image of the wire trug)

What happened? Well some detective work involving my home plot, the compost heap and the supermarket turned up the answer...

Turns out the seeds were saved from a supermarket bought organic Butternut! This particular variety must have been an F1 hybrid and so the fruit did not 'come true' The same had happened on my home plot where similar strange squashes had appeared.

I am taking no chances next year and will be getting in plenty of Harrod's own seed range just in case. 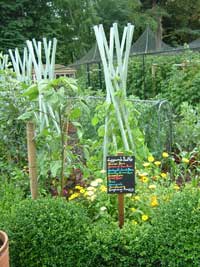 Beans cropped very well early on, but have now started to 'go over' - "note to self", more successional crops of french beans next year! I will also have to get a couple more of our Hazel supports in and sow later in July to ensure a long cropping time.The runners are still plenty full as I did sow late, the Maypole looks grand.

Barlotto de Fiocca are a bright pink Borlotti type bean.They sit swelling and drying and I will take the pods to a dry spot on the vine and hang them to ripen and become papery.Then I shall harvest Stephanie's own organic pulses. A bit of a luxury space wise, but worth it for the colour they provide.

More Strange Crops...
On the subject of colour we have had a nice late crop of bright purple peas - these were a late sown Ezra Krombeck variety, very handsome and a useful strain for early and late sowings.These pretty podded plants have cross pollinated with a green variety nearby and the result has been a green pod with purple splodges; interesting but not particularly attractive, so I will not be saving any of those seeds.

Blighted Again!!
We suffered many casualties in the blight war that now seems to be a regular summer feature of many British vegetable gardens. We lost all but a few of the outdoor Tomato plants and all the Christmas Potatoes. Plans have already been laid to try and avoid this next year involving Hoops and Covers for all the Tomatoes that stay on all season.

The main crop of potatoes was a bit of a gamble, but I love tatties and went ahead planting lots of interesting seed spuds. Digging up spuds is like digging for treasure. 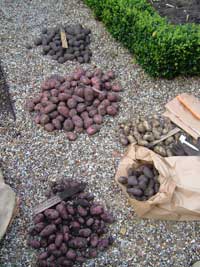 We did suffer the accursed condition but luckily not until late August, this meant the tubers had already formed and swelled.

I cut off the haulms at ground level, removed the debris (I do not compost this) and left the plot for over two weeks. Then, after the spores have died down, you can dig up your spuds, and I must say the handy Sneeboer Potato Fork does this a treat. You can see from the result of my actions, that there is a good sized crop.

A word of warning! Be careful to remove any suspect tubers! They can literally spoil a whole crop overnight. Make sure the spuds are dry and store in a cool dark place.

Busy, Busy, Busy...
Right now I am clearing beds and the compost area has literally trebled its load!

The trusty Felco Secateurs are invaluable when dealing with Raspberry Canes and Brassica stems.

Top Man!
One person who is always busy is Dave, our hard working groundsman. He's got his work cut out with our tree-laden, woodland situation.  Oh those leaves just keep falling... Good job he has Harrod Horticultural's range of rakes, scoops and tidy bags to help. I tend to follow him about with my compost sacks, collecting up the precious leaf mould. Cheers Dave!

Hedgehog Update
Yes, I do think the slug population has dropped somewhat thanks to our two prickly allies, but we still have some way to go and I am still using the old reliables - Slug Rings, Pellets and Gel - where needed, for instance, round my winter lettuce seedlings!

I'm looking forward to the next update when I will fill you in on Green Manures, our composting, and more changes in the Kitchen Garden...

PS... Take a look at the Kitchen Garden in September - click when the cursor turns to a hand to find out more about the products shown...