The last week or so has seen the glorious RHS Chelsea Flower Show taking precedence in the horticultural world, so our fledgling garden has been left to fend for it’s self somewhat, but the combination of high temperatures and rainfall has seen most crops enjoy a growth surge.

Although a large part of the previous week was spent at the show on the Harrod Horticultural stand – which received a commendation for the display, no less – enviously eyeing the vegetables and flowers produced for us by the HDRA at their Ryton Organic Garden in Warwickshire, we still found enough time to prepare the ground and plant out the runner beans and strawberries on our own organic estate. The beans had germinated well under glass and were placed in the cold frame for a around a week, more to create space inside the greenhouse rather than for cultural reasons, and the strawberries arrived via mail order, so needed a permanent home in the soil sooner rather than later.

Speaking of the greenhouse – this is now a tomato heaven, having been totally commandeered by the rapidly growing tomato plants. They are thriving in the soil bed, positively blooming in 37cm terracotta pots and appearing in the rudest of health in a double growbag experiment; one standard growbag is supported by the A-Tom Frame but is slit across the bottom and placed upon another growbag, sliced open across the top. 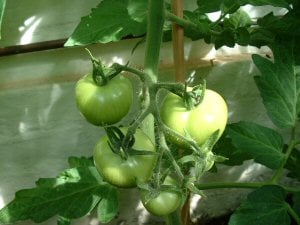 Our thinking behind this? To give the plant's roots more soil to explore, prevent compaction and drying out, and hopefully allow the plant to produce heavier yields. It must be said however that the A-Tom Frame holds the growbag relatively upright anyway, but we await the results of his latest experiment with interest.

Although the tomatoes have taken up the vast majority of the greenhouse, there are some other members of the fruiting vegetable family happily ensconced under glass, if not for the whole summer then for the time being at least. The peppers are happily shooting away in their terracotta pots and will be placed outside in the next week or so, whilst most of the aubergines are due to remain inside and are awaiting transplanting into growbags.

Other temporary residents include our carrot seedlings, recently germinated and growing on nicely in a module tray and soon to be thinned out before planting outside in a row bordered by leeks and onions – hopefully the timing of planting out, coupled by the presence of these alliums and the erection of an enviromesh barrier will have the local carrot root fly population totally bamboozled, but more of this in the forthcoming weeks.

For now however, it is time to re-focus on the task of weeding and general husbandry, as it appears the weeds had a bit of a party whilst we were at Chelsea. As always, please keep visiting us here at the garden and view the main website for full details of all our products, and special thanks to all of you who have mailed us recently – your comments are much appreciated!