Just as the Kitchen Garden settles into the first growing season and begins producing vegetables for consumption, the early summer peace is shattered by the commencement of the next construction phase. The first task was to erect the largest structure in the garden, the heavy duty steel fruit cage, which measures 10m in length by 3m wide. The installation of the cage went extremely smoothly, with our 5 intrepid workers battling manfully under a cloudless sky and burning sun.. Attaching the netting also passed without incident and a final snagging trip around the perimeter of the cage left the whole structure looking very smart indeed. 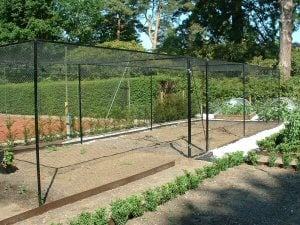 At present, the 30 square metres of cage is only protecting a single row of strawberries but this is all set to change in the autumn when the fruit bushes are planted, although the selection of plants has yet to be finalised. Preparation of the soil inside the cage is due to begin very soon, to give the assorted varieties and cultivars the best possible conditions.

The rest of this construction phase consists of digging trenches through the garden to accommodate electricity cables and irrigation pipes. This precedes the laying of the paths which is due to commence next week. This rather hard manual labour has unfortunately coincided with the warmest spell of weather so far this year. Temperatures in this arid, desert –like corner of  Norfolk have been around 28 degrees C for at least a week and hit 32 degrees C yesterday (Friday).

At the conclusion of these works, we should have a power supply to the site of the proposed potting shed as well as 3 extra taps to allow automated watering of the various beds. We also intend to up-light some of the bay bushes on the corners of the beds which should give the garden an even more attractive appearance.

Back to more green-fingered matters, and the recent heatwave has certainly been greeted with delight by the curcubits in the raised beds, now free from their polythene cover. The courgette plants in particular have trebled in size and we have removed some 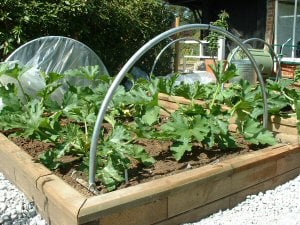 of the early fruits near soil level to encourage further flowers to develop and fruit to set. We expect to begin harvesting courgettes from these plants quite soon. Most of the first crop of lettuce has been cut and consumed, garnished with leaves from the spinach. Both of these crops have been harvested as ‘cut and come again’, but it remains to be seen if the quality of the ‘second generation’ lettuce is acceptable.

We have tentatively uncovered some of the earthed up soil on the early potato varieties, encouraged by the emergence of flowers on the plants which is generally a good indication – on early crops at least – that the tubers are of a reasonable size. The lowest pods on the broad beans are also ready for picking and an interesting development has been the planting out and subsequent protecting of the carrot crop, more of which in our next bulletin. We will also update you on the progress of the plants in the greenhouse and will also hopefully experience the crunch of shingle underfoot as the Kitchen Garden develops even further.