Sowing the Seeds for 2006 It’s going to be a busy year in the Kitchen Garden and I’ve already started sowing our Organic vegetable seeds – as per the plan!   With such a lot planned for the next few months, it is imperative that we hit the ground running with regard to our seed sowing.

After the greenhouse was well and truly scrubbed clean, we were ready to introduce some serious heat and propagation equipment to get underway. The heater was re-installed, a max-min thermometer was added and the heated jumbo propagator was cleaned and re-introduced. I decided to use a digital thermometer/hygrometer to give even more accurate temperature and humidity readings and carefully adjusted the thermostatic control on both the heater and the propagator to achieve the desired levels of heat.
And we were ready! First up for sowing were the tomato (alicante and Gardener’s Delight) and aubergine (Long Purple) seeds - these heat-loving fruiting vegetables required a whopping 18-21 degrees C to germinate, so were placed straight in the heated jumbo propagator. They were sown in the combi-pack number 2 system and covered with vermiculite – I carefully left one pot seedless and placed a propagation thermometer and the jumbo propagator’s probe in the compost to monitor the temperature. 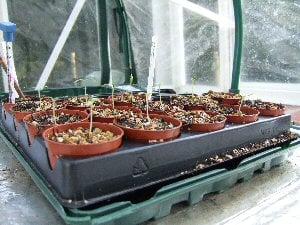 These seeds germinated very quickly and successfully – the tomatoes were about 3 days ahead of the aubergines and have since been removed from the comfortable environs of the propagator to the main greenhouse, maintained at between 14-18 degrees C. Following the failure of the aubergine crop in 2005, I have decided to start early this year and allow plenty of time for re-sowing in the extremely unlikely event of a repeat! The aubergines are being pampered even further – they have been covered with a layer of fleece to help create the warm, humid conditions they insist upon!   Joining these traditional summer plants is the humble leek much more of a cold weather crop. These seeds have been sown into the combi-pack number 1 module system – again, covered with vermiculite and this time placed in the coolest corner of the greenhouse. Leeks only require around 12 degrees C of heat and had just about germinated at the end of last week.

I’ve also been busy in the decorative fruit 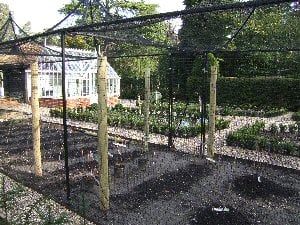 cage, erecting the posts which are to form
the support system for some of the raspberries. The autumn fruiting raspberries have been cut back to ground level – apparently they fruit on this year’s canes – and the first early potatoes are due for planting as soon as I have finished this update!   The existing crops are doing nicely, although the weather in February – at least in the Kitchen Garden – has been very changeable, with early spring-like days interspersed with bone chilling cold and slate grey skies. The broad beans have understandably not put much height on, the onions have been fed and weeded and the entire garden has been treated with Nemaslug, the slug killing nematodes. I am planning to water on these slug devouring heroes every 6 weeks through the season in the hope that the slug population will not get a foothold – certainly, the very small slugs I have seen so far this year seem to have vanished. The soil temperature for this first application was just above 5 degrees C so – fingers crossed – it should be successful.

That just about brings you up to date with my gardening chores for February. Just quickly checking the planting plan leads me to think that March is going to be extremely busy – and you can read all about it here in about 4 weeks’ time! In the meantime, please remember to visit our Online Gardening Forum for the latest tips, information and articles from the horticultural world!