Here we go again! It’s been three whole years since construction of the Kitchen Garden began, back in January 2005. I remember well the fun times I had cutting and lifting turf, removing hedges and digging out endless roots to create the established garden which now exists.

It’s always good to keep photos and see how your garden projects have developed, and we’ll be taking a nostalgic glance back at the garden’s inception in this update. We’ll quickly spin round and look to the future as well – Sharon’s been busy with her watercolours and has produced some beautifully detailed plans for the coming year.

She’s also found time to order a van load (literally) of some of the winning products added to our range this year, and where there’s muck, there’s magic – we’ll report on a big delivery of good old manure!

Not everything in the garden has been smelling of roses (and I don’t mean the manure!) as Sharon’s encountered problems with mice squatting in the greenhouse. Find out how she tackled this problem and exactly what else has been happening, garden-wise, in the last month below.

And although the evenings have been getting oh so slightly lighter, there’s still no better time to spend a few minutes browsing our very popular Garden Forum, where you’ll discover a whole archive of gardening news, information and snippets. Also, don’t forget to check out our Ask the Expert feature as there might be an answer to a problem that’s been baffling you for a while. But if there isn’t, don’t despair – send in your question and we’ll try to find a solution.

Aah, January 2005. The world was trying to come to terms with the devastation caused by the tsunami in Indonesia, Chelsea were well on the way to winning the Premiership title, Elvis was top of the hit parade – and in our little corner of Norfolk, work began on the Kitchen Garden. The site was originally a lawned area, surrounded by established yew hedging which ran immediately in front of the greenhouse so, unfortunately, had to go (before there’s any uproar, all trees removed were replaced by new ones). A mechanical turf cutter was hired in, all the rolls removed for composting and the outline of the garden marked out. I’ll stop there as the images below tell the initial story much more eloquently, but just compare the garden then as it is today. Isn’t progress wonderful? 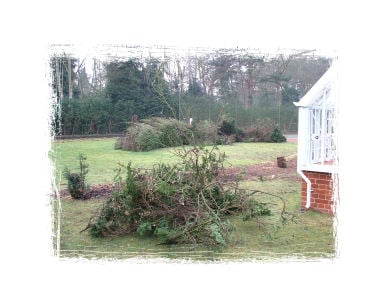 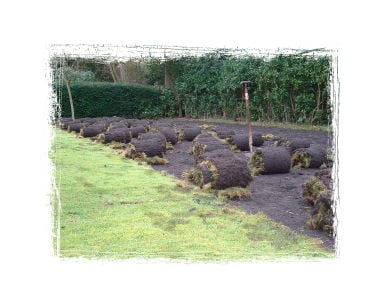 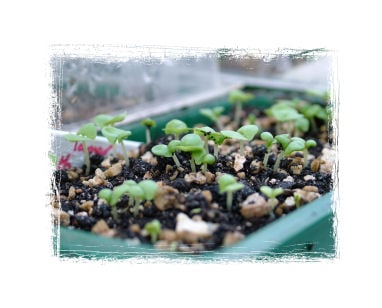 Ok, maybe it’s not quite on the same scale as the worldwide carnival, but there’s a real riot of colour appearing in the Kitchen Garden greenhouse right now. Sharon’s been busy sowing and growing seeds of various out-of season crops - ably assisted by the trusty heater and a selection of propagators – as she explains. “We’ve got aubergines, peppers, tomatoes, various basils and herbs all sprouting in the greenhouse. The basils will eventually be transplanted into the sunniest raised beds, and the tomatoes – a mix of heirloom varieties and some from our own organic selection – will end up in mini-raised beds.” 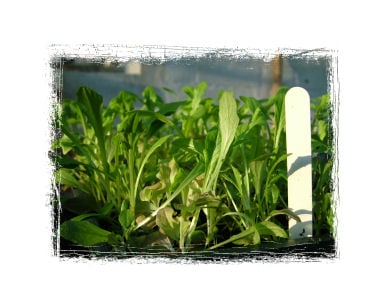 But that’s not all. “I’ve used the unheated Vitopod garden to house the pea, bean and sweet pea seedlings along with the rootrainers, complete with lids,” she says. Why the extra security Sharon? “Ah yes,” she confesses, “we’ve had problems with mice in the greenhouse. They’ve been munching the seedlings and leaving the tops cut clean off as they search for the seeds. A pea or bean seed must represent a great meal for a hungry mouse in the depths of winter but the greenhouse isn’t a mouse soup kitchen!” she laughs. “I’ve introduced a new plug-in pest stop which should send them on their way.” And with those little intruders out of the way, the show can go on! 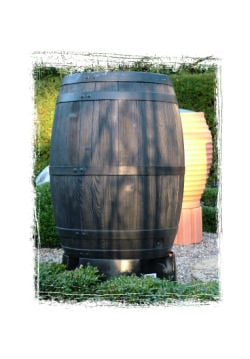 The Kitchen Garden vista has changed dramatically over the last month, as a troop of water butts have stationed themselves at the corner of each bed. A mix of terracotta urn type vessels and black oak effect butts – and very convincing if I do say so myself – will be used to provide the essential commodity for various irrigation systems come summer. The brain behind this aqua-plan is, of course, Sharon. “We can fill the butts up from the well supply whilst the water table is high, and then use the stored water for irrigating beds in the summer,” she revealed. “I’m also hoping to add liquid feed directly to some of the water butts to help cut down on the time spent hand watering – and it should work well when we’re on holiday as well,” she added.
It’s a great idea - no butts about it! 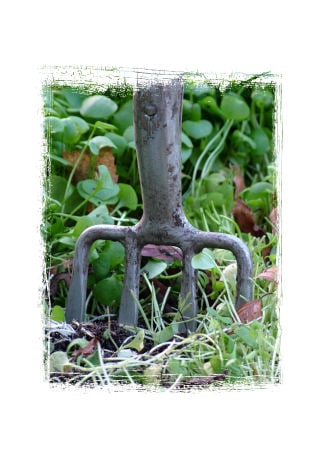 ‘A good drop of dung’ - as they say in these parts – goes a long way to making your plants happy, and some of the beds in the garden must have been delighted to see a great steaming 3 tonne pile of the stuff heading their way recently. Sourced from a local stables (no unnecessary muck miles in this garden!), the well-rotted organic matter was spread thickly over the beds by a sweet-smelling Sharon. “I’ve piled the lovely old stuff under the fruit trees – and been careful to keep away from the trunks – on the brassica bed and also on the area reserved for this year’s potato and sweetcorn crops,” she grinned happily. “I’ve also given the raspberry canes and blackcurrant bushes inside the fruit cage a good dose, before I add a final top up of strulch and straw.”
Sharon’s muck spreading did not stop there. “I’ve covered some of the green manure crops in the link-a-bord beds with weedblock paper and then added the new manure on top,” she said excitedly. “This will smother the greenery which will rot and improve the soil, and I’m also in the process of digging in the miner’s lettuce, another green manure, and the phacelia will follow shortly.”
As I said in the intro; where there’s muck, there’s magic…

This Year…
As the garden enters its fourth year, what plans does Sharon have for 2008? “I think soil improvement is the key this year,” she says. “I’ll be mulching with strulch, our home-made compost and straw for example, and I’ve got plans for lots of companion and soil improving plants. I’d like the garden to take on more of a potager feel with plenty of pretty, beneficial and complementary plantings, along with more varied types of tomatoes and potatoes.”
“With the new products at my disposal, and the pest control measures I put in place towards the end of last year, I’m confident of a good year,” she concluded. 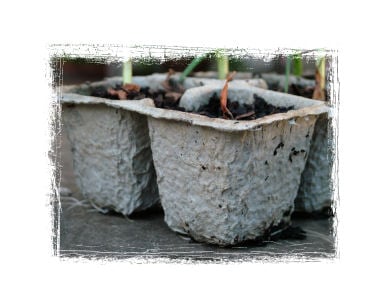 You might remember from my last e-mail update (subscribe here if you didn’t receive a copy) that we were planning on introducing some of the brand new 2008 Harrod Horticultural products to the garden. Sharon has subsequently planted up a few of her onion sets into the paper plant trays, and has come up with the following tips; “check regularly for slugs between the pots and don’t over water,” she says.
Other winter crops adding a dash of green to the winter garden-scape include oriental veg, carrots, chard and winter leaves, whilst the brassicas have been cleared – “to create a planting gap to help get rid of pests” according to Sharon.

Speaking of pests - Head Gardener Dave, the green-fingered curator of the formal gardens surrounding the Kitchen Garden, has been hit by an attack of the shingle. Fortunately, that’s not a spelling mistake and Dave’s not been struck down by the painful skin condition as he explains; “One of the jobs in my winter maintenance programme is to re-dress some of the more thread-bare paths around the garden. I’ve been applying porous ground cover to the worn areas of pathway and spreading shingle on top, aided by the extra width of the Sneeboer gravel rake. Unfortunately, it’s not pure gardening but this is the time of year to carry out these projects,” he puffed!

If, after reading this update, you’ve developed a thirst for more horticulturally-based info, then our extremely popular Harrod Horticultural weblog - accessible from the Garden Forum link on this page - is well worth a look. The variety of gardening news, information and opinion we’ve been posting is proving very popular, with composting to the fore this month. You can even place comments of your own, especially if you’ve got some good gardening tips or can relate to some of the articles we’ve written. It’s another excuse to use that PC/laptop you got for Christmas!