Mid April and finally the sun has cut through the misty grey East Anglian sea haze which can hang so close it feels like I am wearing a cold and damp blanket across my shoulders. Warming rays penetrate and I am sure that time has sped up as everything is super charged....bristling, newly imbued with the bright luminescence.

The plants are literally growing right in front of my eyes, with energy that is all the more impressive for being so transient; this really is a magical time of year, at no other time will there be such evident potential everywhere you look. 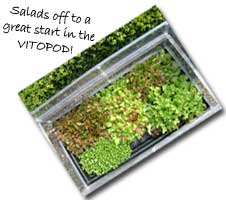 The cold frame is full to bursting with early sown seedlings. I try to be Zen like in my organisation of cold frames, something goes in and something comes out. I like to have a good amount of space in the green house as plants need air flow and as much light as possible. Last year the tomatoes became rather over stretched as a result of competing for light having been stacked pot to pot for too long. I do try to learn from my mistakes. This year the cold frame is taking the strain and I have also utilised the Vitopod.

I used this last year and was impressed, the clear sides allowing light to penetrate right to the plants meaning that nothing gets ‘etiolated’ and lanky. At the moment it is host to an array of lettuce, of different colours and textures including Red Salad Bowl, Little Gem (Stephanie’s favourite) and Batavian varieties.

Now there are mistakes and misfortune and my next topic comes under the latter heading. Having purchased lots of strawberry plants last year for the various planters round and about the garden, I was confident that this year I would have enough plants to fill all the new beds earmarked for the juicy red berries. I had set several runners from the established Link-a-Bord patch that did so well last year, they had made nice new plants and these together with the ‘planter’ plants would fill the new beds with some to spare, alas, best laid plans in the garden can go to waste! 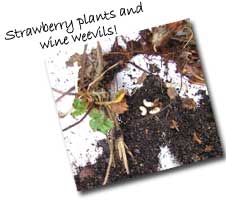 All of the strawberry planters were looking very sad, the strawberries just were not growing, they were brown at the margins and stunted. I emptied the saddest looking planter and made a rather surprising discovery, the stems were almost entirely turned to a brown powdery substance reminiscent of old rotten wood. Closer inspection revealed the culprits - small comma shaped creamy white grubs; the planters were riddled with them. I trotted off to the potting shed to consult the only book worth looking at in such times; the ‘RHS Encyclopaedia’ a flick through its pages soon yielded the answer vine weevil grubs!

Sometimes even bad news is welcome, I had been struggling with the planters all last season, and they just never got growing. I fed, watered, replanted all to no avail! Now I could hopefully achieve what had been me alluding last year, cascades of fruit and flowers. Nematodes to the rescue, I am very pleased that we stock an organic solution as so often the only listed remedy is a chemical one. 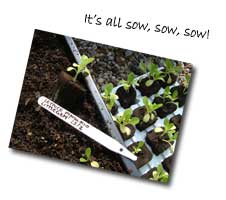 The last of the winter sown leaves are being harvested to be replaced with new season plants. The spinach Primo F1 did very well producing good yields from January onwards. The mizuna and oriental leaves are going to flower but are still tasty and interest to salads.

Pigeons are one of the main garden pests of the moment, they will ravage crops, especially brassicas, which they will strip to bare stems, even the spiciest of mustards will be ‘strimmed’ down to the ground. Use vegetable cages, cloches, fleece, nets - anything to provide a barrier.

Mice can still be a problem right now. I am trialling a mesh cage to prevent disappearing seeds, and it seems to be doing the job, unlike the other experiment of a strong smelling barrier which failed to deter the pesky rodents. I soaked pellets in a powerful mix of Mint and eucalyptus oil and encircled newly sown broad bean seeds in the belief that this would thwart the critters, but all the seeds disappeared. Well at least the mice can breathe deeply now! 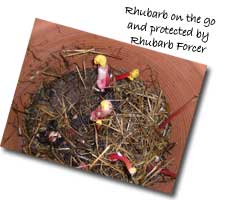 Rhubarb has been providing nice sweet stems from the forcer, this is a particular favourite of Stephanie’s and I may need to fit in more crowns to the garden at some stage to meet demand, do remember to take the forcer off to rest younger crowns though and give them a chance to re gain their strength.

I am on to the next round of sowing now brassicas, main crop peas, late broad beans, more leaves and herbs including basil. Later in the month beans, sweetcorn, cucumbers and squashes will be sown.

Lastly let's not forget the spuds, they should be in round about now (Good Friday was a traditional ‘spud day’) you may even be harvesting green house grown potatoes already. I have been persuading Stephanie to wait just a bit longer for a bumper planter grown crop.

Well that is quite enough blog for now, let’s all hope for a more settled season for the gardeners this year!