September in the Kitchen Garden

September arrived still warm and dry, no rain in the forecast.  And if there was any rain it only went about an inch into the soil, most of the rain was washed away as the ground was so hard.

In the kitchen garden this meant the sprinkler was being used nearly every day, especially on the winter vegetables.  The squash plants started to die even though they were still being watered so the fruit was removed.  The butternut where given a couple of extra days to harden up and then these where then stored in the larder.  The sweet dumplings I left outside for a couple of weeks to harden as these where quite small.  The courgette plants are still producing fruit but much smaller, these I decided to leave for a little longer before I dug them up. 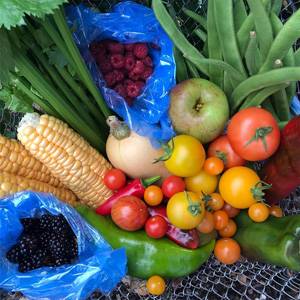 During September the autumn raspberries provided vast quantities of fruit, which surprised me as the bushes were dug up at the beginning of the year and moved into metal raised beds.  I thought that they may have had a rest this year but obviously the bushes enjoyed the new soil that was put into the beds.  The blueberry bushes also provided us with a bumper harvest this year; these too had been moved into metal raised beds and bedded in with bags of new ericaceous compost.

In the greenhouse the aubergine plants were still providing fruit but the tomatoes plants, which had done poorly this year,were removed and added to the compost bin.  The chilli plants have had masses of flowers and are now producing dozens of spicy fruit.  Even though we haven’t had a lot of rain during the month we have had strong winds so it was decided to harvest as many of the cooking apples that were ripe and these have been stored on wooden apple racks in the dark to be used over the winter months. The last of the carrots have been harvested and the sweet corn has been picked.  By the end of the month the kitchen gardens various beds are revealing bare soil.  These will be allowed to rest for a while then they will have manure added and then dug over, ready for the new crops.

In the other gardens the autumn prune and cut back has started. The old lavender bushes have had their annual cut and tidy.  This year we have given the wild flower garden a partial cut back.  We normally cut this area back to ground level in February but we have decided to cut all the dead flower stems in the autumn, see if this produces more flowers next year.  As the month remained dry this gave us the chance to give the yew hedging its annual cut and restore it to its crisp appearance ready for the winter.