Aphids are one of the most common garden pests, appearing on leaves and stems of flowers and vegetables in vast quantities - but it's not just the foliage they like to feed on...

The root aphid, as the name suggests, feeds on the roots of various greenhouse, house and outdoor plants - resulting in grow checks and wilting. Thankfully, some species of aphids have alternative host plants and only attack plant roots during one part of their cycle, but there are others - the artichoke tuber aphid, for example - which 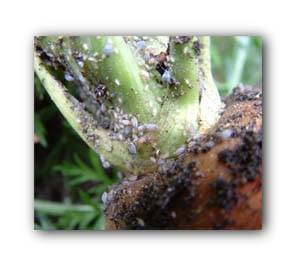 live on the roots permanently.

Lettuces are specifically at risk and enjoy the distinction of having an aphid species named after them - the lettuce root aphid, which is also a good example of the alternate host syndrome, as the pests overwinter on poplars before migrating to lettuces and sowthistles (the importance of weeding cannot be understated!) in the summer.

Control of the white or light-coloured root aphid follows the same lines as the above-ground pests, when identifying and removing the aphids as early as possible pays dividends. Regular checks of plants will reveal the first intruders, which can be removed by hand, by spraying with a soap/fatty acid based organic pest control spray or by blasting into blivion with a jet of water. Vigilant checking of the roots of brought in pot or plug plants before planting or re-potting can also expose stowaways, which can then be removed in the same fashion.