Potato growers across the country – both amateur and those whose livelihoods depend on a good harvest – are still coming to terms with a disastrous 2007 season, where summer floods and widespread blight combined to decimate crops, reports horticulturist Martin Fiddes.

But it’s not all bad news. With the extreme weather conditions of last summer unlikely to be repeated in the near future, slugs are a good bet to regain their mantle as the potato’s biggest pest. And when they do, we’ll all be ready - bring on the nematodes! 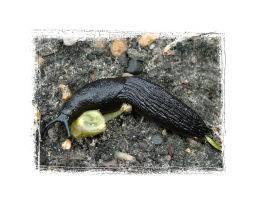 Lincolnshire-based Branston Ltd., one of the country’s leading potato suppliers, is helping their network of growers discover something many of us allotment holders/veg patch gardeners already know - just how good nemtode-based Nemaslug is at controlling slugs. The company - Tesco’s largest fresh produce supplier - is well-aware of how serious and costly a problem for potato growers slugs can be, and during 2007 they encouraged 30 of their number to use Nemaslug. Originally, the target was to treat 100 hectares with Nemaslug, but due to the wet and humid season demand increased to over 450 hectares.

On this occasion, amat

eur gardeners face the same problems as their commercial counterparts with the Keeled slug – which consistently pose the biggest problem to potatoes as they are active underground, and are therefore unaffected by traditional pellets – not fussy whose potatoes they attack. It’s in this subterranean environment that the nematodes come into their own, as they actively seek out the slugs and infect them with a fatal dose of bacteria. And the good news is that unusually, a treatment which is used in the commercial market is readily available to amateur gardeners.


Have I used them? On yes - I’ve had plenty of experience of using Nemaslug, and nematodes in general, in our own Kitchen Garden. You’ll find me out there in mid-March, waving my watering can around and applying the greedy little slug hunters to the soil. I’ll repeat these antics every 6 weeks and although I’ll accompany the treatments with traditional (organic, of course!) slug repellents and traps, there really is no better way to look after your spuds!