Remember last month when I bought you news that the local produce market was booming? The growth of this sector shows no sign of slowing down - and organic food in general has received a real boost. 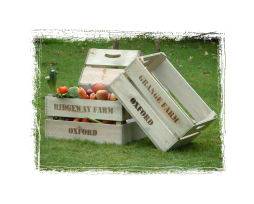 According to this report I discovered on the National Website of Wales, a recent 10 year survey conducted in the United States has discovered that organically produced fruit and vegetables "have twice the amount of antioxidants that conventionally-grown crops have, which reduce high blood pressure, reduce the likelihood of heart disease, strokes and could actually stave off some forms of cancer and dementia."

The results of this comprehensive reasearch have prompted the Soil Association to lobby the Food Standards Agency (FSA) - an independent food safety watchdog - for a review of the way it regards organic produce. The FSA have responded with the promise of a three year study to re-evaluate their stance on organic food.

And there's further good news for the local organic producer, with the news that sales of organic food have increased by 30% this year, with the whole sector - including box schemes, farmers’ markets and farm shops sales - now worth around £125m a year.

The report goes on to criticise the muddy waters surrounding organic food and it's supposed benefits, with detractors claiming the produce is over-priced and no better for us than conventionally grown crops. Advocates however continue to insist - with the support of the US survey - that organically raised fruit and veg does have major helath advantages, and the fact the FSA have comissioned a report would seem to echo those thoughts.

Our Kitchen Garden will continue to produce food in the time-honoured organic way, with our major delight being the taste of the fruit and veg. And, after all, 'you pays your money, you takes your choice...'

What do you think about organically produced fruit and vegetables?
Is it overpriced?
Are there health benefits?
Is the taste of this produce sweeter, sharper and more intense?
Or is just a myth?

Email me with your comments at martin@harrod.uk.com and we'll see what the general opinion is!