You can’t over-estimate what a major garden problem slugs are and for years, gardeners have tried all sorts of tricks, traps and techniques to protect their plants from these premier league pests – and now, in the shape of Nemaslug Slug Killer, they may have found the answer.

It’s all thanks to a microscopic worm – or nematode – which goes by the name of phasmarhabditis hermaphrodita and has an unhealthy fascination for all things slug. These allies of the gardener are present naturally in the soil and do their fair share of slug killing under normal conditions, but when you apply the millions more contained in a pack of Nemaslug, it’s like unleashing a party of kids into McDonalds – and a hungry party at that!

Applying Nemaslug couldn’t be easier and if you garden on a large scale or just don’t have the time for anything too complicated, you’ve come to the right place. Nemaslug is simply mixed up in a watering can and watered onto your allotment, raised beds and border soil (a coarse rose gives the best results), preferably on a dull, overcast day with little wind. Keep the soil moist beforehand and for up to a fortnight after application, don’t use until the soil temperature is in excess of 5ºC (typically from March to November) and that’s just about you done – now the only thing left to do is let nature take its course! 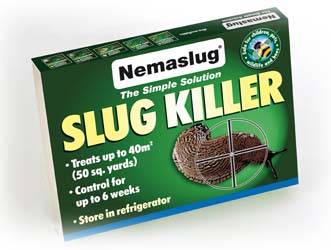 The nematodes will actively seek out the slugs in the soil – and this is where things get a bit gory so you might want to skip this bit – enter their body through any cavity or pore opening and spread a bacterium which stops the slug from feeding. Not surprisingly, the slug doesn’t last long without food and dies under the soil – no messy emptying of traps or collecting carcasses with Nemaslug – and the nematodes breed inside the dead slug, releasing millions more hungry worms with the same thing on their mind.

You can expect six weeks of peace once Nemaslug Slug Killer has been applied; this is length of time the nematodes feed for before their numbers die back to the original status quo, but Nemaslug repeat treatments at six-weekly intervals will give you almost total slug control and a garden to be proud of!

Let’s recap; Nemaslug Slug Killer is natural, it’s easy to apply, can be used from spring right through to autumn and you don’t have to go around picking up dead slugs. Are there any drawbacks? Well, no not really, as you can add the following qualities to the burgeoning Nemaslug CV;
• Totally organic
• Harmless to children, pets wildlife and the gardener
• Impossible to overdose
• Plants can be harvested, washed and eaten minutes after application
• No poisonous chemicals passed on through food chain
• Can be applied to larger beds and borders with a hosepipe feeder

And there you have it! Finally, it’s just possible gardeners may have found a way to knock slugs of the top of the RHS Annual Garden Pest List