I'm back! Following a busy week even by my standards, I've finally returned to my keyboard and can bring you a fully illustrated report on the latest Kitchen Garden Sowing and Growing Event to be held at the RHS's Harlow Carr gardens. It goes something like this... 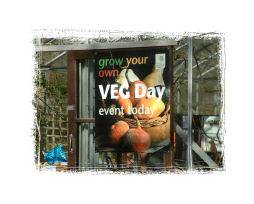 The 27.5 hectare garden on the outskirts of Harrogate in North Yorkshire was the venue for a full programme of informative talks, demonstrations, exhibits and themed family activities, all designed to generate interest in growing your own vegetables. The previous event in February this year proved very popular, and nearly 2,000 paying customers passed through the Harlow Carr gates on April 11th, with 36 visitors taking out RHS membership on the day.

Senior Supervisor for Garden and Technical Services, Lizzie Balmforth, ensured the displays were in pristine condition and the exhibitors well catered for. Now in her fourth year at Harlow Carr, Lizzie explained the thinking behind the series. “The objectives of the K 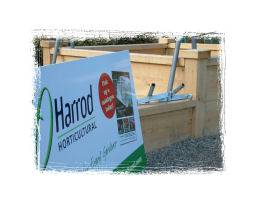 itchen Garden Growing and Sowing Events are to generate an interest in food, and highlight the importance of local produce and growing your own veg,” she said. “We try to explain, through the talks and demonstrations, which vegetables can be grown within the seasonal time frames, and also encourage people to grow for taste rather than for yields – an approach easily adapted to your own plot or garden.”

“It’s clear that this message is reaching many gardeners as the recent upsurge in traditional varieties shows,” continued Lizzie. “It’s also important that we make consumers aware of just how much the transportation of food globally adds to the carbon footprint, and if we can encourage sustainable growing, everyone will benefit.”

Harrod Horticultural enjoy a close relationship with the RHS and were delighted to demonstrate some of their extremely popular timber raised beds at the event, which, along with the new style of crop protection caravan hoops and ground anchors, attracted much interest. The Lowestoft-based mail order company have their own Kitchen Garden, where products are both developed and tested, and know only too well the pitfalls and benefits of home grown vegetables.

Head Gardener at the Kitchen Garden is Martin Fiddes, who was in full support of the Grow Your Own Veg Initiative. “I th 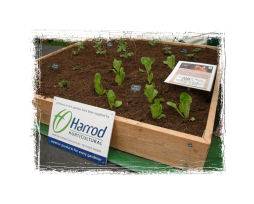 ink it’s a very worthwhile day in a superb location, and I’m particularly impressed by the family activities, with children able to plant up potato pots and even design their own mini-plots.” He continued; “Our raised beds and caravan hoops have been a real talking point with the many visitors, and it’s also nice to see one of our other raised beds planted up in the activity marquee.”

Also impressed by some of the Harrod Horticultural products was Harlow Carr Gardens West Supervisor, Sarah Darley. Responsible for one senior and two general gardeners, as well as her duties as the voice of Harlow Carr on the hugely popular BBC Radio 4 series Gardener’s Question Time, Sarah wants her staff to use comfortable tools which will not need replacing regularly. “Most tools on the market have handles which are just not long enough, which of course leads to back problems,” she explained. “We find that the Sneeboer tools are proper tools, hand made and robust – and do the job perfectly.”

Lizzie Balmforth was keen to back up Sarah’s appreciation of the Sneeboer range of tools. “The ladies spade is a real favourite, but I just love my short fat trowel - it’s m 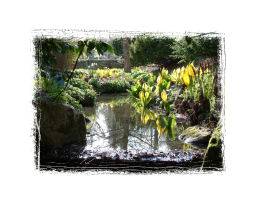 And it’s no wonder that Sarah doesn’t need the worry of regularly repairing or replacing tools, as she is heavily involved with the RHS-funded Gardener’s Question Time Garden project. This ambitious scheme will see the programme broadcast from Harlow Carr’s own custom built garden, currently in the first stages of design with input from both TV favourite Chris Beardshaw and multi-Chelsea gold medal winning designer Bunny Guinness.

Harlow Carr are hosting two further Kitchen Garden Sowing and Growing Events later this year; on August 31st the theme is harvesting, whilst a week long special which coincides with the October half-term (20th to 28th) concentrates on ‘A Taste of Autumn’. For full details of these and the many other courses and workshops held at the garden, contact RHS Harlow Carr on 01423 565418 or visit the comprehensive website here.