Anglesey-based Williams, who recently announced his retirement from exhibiting at the Chelsea show, is concentrating on breaking the current world record for an onion - 15lb 15.5oz in weight, with a 33" circumference and held by Mel Ednie.

According to a report on the BBC website, Williams is growing his protege on a bed of clay pebbles, using articial light and feeding it with nutrients three times each day - not quite your normal growing conditions! This is one of the few occasions that Medwyn is not relying on the Link-a-Bord raised beds to grow his veg, although the various component parts could easily be used to accomodate such a giant! 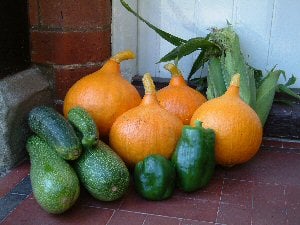 Veg growing ground-breaker Medwyn - who introduced the original two-tiered growbag system - will be exhibiting some of his other (smaller) specimens at North Wales' premier gardening event, The Gardening Show. This Welsh horticultural extravaganza will be held at Llangollen's Royal International Pavilion over two days at the end of July, the 28th (a Saturday) and 29th.

And it seems that big veg are big news at present, with the BBC TV series The Great British Village Show focusing firmly on the age old tradition of growing the biggest marrow etc. Hosted by erstwhile horticultural favourite Alan Titchmarsh, the series is visiting six stately homes across Britain in search of a village show national champion, and can be seen on BBC1 at 7.20pm Sunday evenings.