A quick snapshot of British vegetable plots, kitchen gardens, allotments and even patios will undoubtedly reveal that potatoes are right up there when it comes to which grow your own crops the country's gardeners are growing. 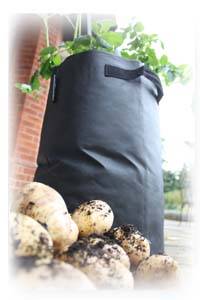 Relatively simple to grow, an essential part of the crop rotation cycle and extremely versatile in the kitchen, potatoes are a very popular crop for novice and experienced gardeners alike and here, our horticulturist Martin Fiddes gives a few words of advice on potato flowering and why it's not esssential to the success of the crop...

The production of potato flowers has no effect on the growth of the tubers – some potato varieties do not even produce flowers and of those which do, flower production can be very erratic – so don’t worry about the lack of ‘blooms’, which incidentally can be caused by a lack of water.

Potatoes are a member of the Solanaceae family – along with other popular garden vegetables tomatoes and aubergines – but one notorious family member is deadly nightshade and like this plant, any seed berries potatoes do produce can be prove fatal if consumed due to the amounts of solanine they contain, so a lack of flowers and fruits could well be an advantage.