One of this season's big success stories at the Kitchen Garden has been the new trailing courgette plant, Black Forest. This cucurbit leviathan is rapidly taking over the greenhouse at the garden and it's certainly a plant we'll be welcoming back next year, says horticulturist Martin Fiddes. 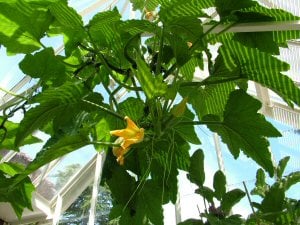 Launched by seed giants Thompson and Morgan earlier this year, Black Forest has a unique trailing habit which, unlike other courgette varieties, requires some form of support. That's one of the reasons why we chose the greenhouse border to house the plant, as the frame of the structure gives plenty of opportunity for securing supporting wires and such like; the greenhouse was also a logical planting spot for the mammoth plant as the seeds were sown in January!

The whopping plant has now produced over 20 delicious fruits and is revelling in the August sunshine; of course, with no threat of frost under glass, it's going to be interesting to chart the progress of the beast and see just how long it can keep going!

As with it's bedfellows under glass (four friendly tomato plants), big old Black Forest has been grown using the Ring Pot Culture system. This highly successful method of growing involves encouraging the plant to develop two sets of roots; one to feed, and another, more extensive system, to search for water. It's certainly been success story over the two year period we've tried it, and rest assured ring pots will be on the Kitchen Garden shopping list for 2008.

And on the subject of next year, we'll be growing Black Forest once again - but this time there'll be more plants, both indoors and out, for a thorough road test.

If you fancy having a go at growing this courgette next year, Black Forest seeds are obtainable from both Thompson and Morgan and the Organic Gardening Catalogue.