Fences, Trees and Boundaries, Who’s Responsible for What?

A house is more than just bricks and cement; it’s your home, a sanctuary into which you can escape from the outside world and into your own paradise, the same rules apply to the garden. Most people see their garden as their own private oasis, a place which they can make it their own and de-stress from a hard day’s work, but what do you do if you have an interruption on your paradise? Whether it be in the form of a stray branch or a broken fence an invasion is never welcome, but who is responsible? Is it up to you to trim back the stray branch or should you neighbour be keeping control? Do they have the right to ask you to pay for that fence that you didn’t erect in the first place? Let’s find out  . . .

Trees can add a great deal of life to a garden, bearing fruit in autumn, blossom in the spring and a place in which to retreat to the shade in the summer. However, they can also cause a nuisance to a next door neighbour when they start breaching their boundary into the opposing garden; problems can range from attracting unwanted insects like bees and wasps, blocking out light and shedding unwanted  leaves, but the question remains, who’s responsibility is it to dispose of these unwanted branches? The tree belongs to the person upon whose land it was originally planted and the branches that grow so as to overhang the neighbours' land are trespassing on their air space. The neighbour can chop the branches back to the boundary but has to return the lopped branches to the owner of the tree together with any fruit that might have been on them, to take any fruit or flowers from the tree, even if it is on your land, is an offence under the Theft Act 1968. If the neighbour cuts beyond their boundary then it is technically classed as a trespass. It is always best to ask your neighbour first before trimming the branches, although you do not need their permission so long as the trimmings are returned (see diagram below). 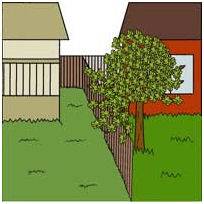 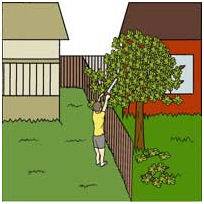 As with branches, the same rules apply to the roots of trees. If the roots of a tree trespass into a neighbours garden than the neighbour has the authority to trim them back without the owners consent. Roots however can cause significant damage to your property, for example they can grow under paths or the foundations of your house, particularly in fragile areas such as conservatories and garages, which can lead to upturned paths or cracks in the walls or floors. If such an occurrence was to happen than the owner of the tree can be held liable for their neighbour’s damage and in extreme cases can be sued for the damage.

Society today are generally accustomed to seeing fences surrounding the gardens of individual houses, however, really there is no legal obligation for this to be done. It is the decision of the owner of a property as to whether they wish to put a fence up around their boundaries and is therefore their responsibility to maintain that fence. But what can you do if your neighbour is just letting their fence rot away? The answer, unfortunately, is nothing. If your neighbour is not maintaining the upkeep of their boundary fences than there is nothing you can do in order to make them fix it in the eyes of the law. There are ways in which you can ignore the dreaded fence, for example there is no law stating that you can’t erect your own fence alongside the old one in order to hide the eye sore. If you are going to erect a fence however, the maximum height that is allowed to be erected in rear gardens is 2 meters so be sure you don’t go too far in trying to hide your neighbours.

Boundary issues between neighbours are always going to be an issue in society, there will always be those stray branches or that one person who just will not fix that hole in their fence. Always be sure to speak to your neighbour fist before taking any action as they may not even realise there is an issue, however for those who wont acknowledge the problem there is always a way in which you can manage to keep your paradise a paradise.