As the Royal Horticultural Society's summer calendar of events roadshow rolled straight out of Hampton Court bound for Tatton Park recently, one important award - which you won't find on the list of Show Garden winners - was overlooked. 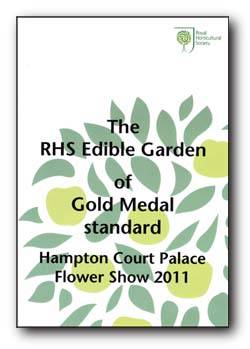 For the Edible Garden showpiece dispay at Hampton Court, designed by much feted green-fingered duo Jon Wheatley and Anita Foy, was rewarded with the equivalent of an RHS Gold Medal.

But why no standard Gold Medal for the garden, which featured many Harrod Horticultural products including one of our new Garden Arches?

Anita Foy explains; "As the garden was an RHS exhibit, it was not possible to receive an award. However, it was judged to be of gold standard and as such, we received certification from the RHS in lieu of a medal."

If you missed out on taking a leisurely wander through the Edible Garden at Hampton Court and didn't get to see the many contributing Harrod Horticultural products, fear not; many are available to view at various Show Garden locations around the country with our new garden arches likely to come on stream in the very near future too!