Composting at the Royal Norfolk Show

We sent our versatile and multi-skilled horticulturist Martin Fiddes off to the packed Norfolk Showground to appear as a Master Composter on the Norfolk County Council (NCC) stand at the Royal Norfolk Show recently - and by all accounts the day was a roaring success!

Trained as a Garden Organic/NCC Master Composter back in 2006, Martin advises our customers on all composting issues and was in good com 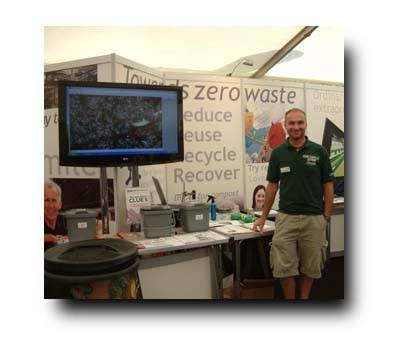 pany at the show as he and fellow MC's Kate and Dawn fielded home composting questions from interested showgoers and helped pass on composting information and start-up advice to wannabee composters.

The recycling stand, situated inside the extremely well laid out NCC exhibit, featured many learning resources including an active wormery, magnifying kits for viewing compost heap bugs, a cut-away compost bin and a highly magnified box of soil containing composting worms, images of which were displayed on a large computer screen - prompting many double-takes from the thousands of passers-by as the worms quickly burrowed back into the soil!

With a composting competition for children - correct answers were guaranteed a prize of a fridge magnet, tea towel or kitchen caddy - plenty of literature and composting information to hand and details of the NCC's Community Composting initiative, there was plenty for everyone on the stand - so if you missed out this year, make sure you head to the NCC exhibit first next year!

Royal Norfolk Show dates have already been fixed for next year; you can visit the country's largest two day agricultural show on Wednesday June 27th and Thursday June 28th 2012. Make a note in your diary now!