Bumblebees in the Garden

It wasn't only our hands-on horticulturist and Master Composter Martin Fiddes who attended the Royal Norfolk Show this year as garden pest control expert Julian Ives occupied a slot on the Easton College stand - accompanied by around a hundred of his friends!

The man with a raft of pest control solutions at his fingertips took along one of the Beepol bumblebee hives to explain the benefits of introducing these unrivalled pollinators into the garden to the many show visitors and just like at the RHS Chelsea Flower Show, the bees were the centre of attention.

Julian was highlighting just how much of an increase in crop yields and flower quantity the bees bring to both the kitchen and ornamental garden and why bumblebees in particular wear the crown of 'King Pollinators'. 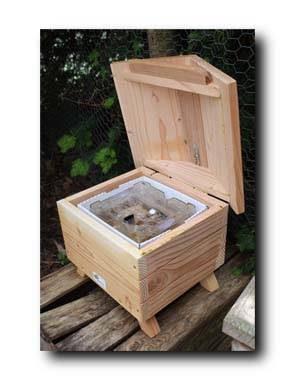 "Bumblebees are bigger, stronger and hairier than other garden pollinators such as flies and honeybees and this allows them to pick up more pollen. Grains will stick to the bees' fuzzy coat, they are tough enough to force their way into tighter flowers - especially legumes - which other bees and insects would shy away from and they will work at cooler temperatures than honeybees," advised Julian.

He continued; "Initially, you'll find around 30-40 worker bees and a queen in each Beepol hive but the colony can grow to around 200 by mid-summer. The queen, bees and entire colony will eventually die out as the weather turns colder towards the end of the year but not before new queens emerge, mate with the drones and leave the hive to hibernate throughout the winter. These queens will then emerge in spring and hopefully set up a natural hive nearby; in the bottom of hedgerows and abandoned mice nests are their favourite."

When you consider the bees are safe to be around if you're a child or a pet, they require little if any maintenance and there's an attractive free-standing or tree-mounted lodge available to house their hive, introducing them to your garden is really a must!

There's loads more information available about the Beepol bees and hives or if you've any further questions you'd like Julian to answer, just drop him a line!