As shadows lengthen and the pale winter sun rises late and sets early, there is a definite feeling of the garden being at rest. It appears that the vigorous growth and general hustle and bustle of the summer has taken it’s toll; insects are hibernating and the soil is cold and unforgiving. But it’s not gone completely quiet…

A few hardy summer veterans soldiered on until the sharp frosts of mid-November finished them off and although we had a number of healthy sized pumpkins at the end of October, they were a disappointing shade of green and not the explosion of orange and yellow we were hoping for (amid the first-season rush they were planted a bit too late!)

So, we wrapped up warm, grabbed our Sneeboer fork and set about clearing the beds and at the same time, breathing new life into the soil in readiness for next season. Out came the courgettes, cucumbers, pumpkins, squashes, broccoli and brussel sprouts and on went the soil enhancing mulch/manure, still steaming with heat in the crisp winter air. The debris from the previous crop was removed, along with any perennial weeds, and a generous layer of mulch applied to the soil, along with lashings of bonemeal. This healthy concoction was incorporated into the soil and we have enlisted the help of the winter frosts – nature’s most efficient cultivator - to help break down the remaining clods even further; and if the weather forecasters are to be believed, we should be in for quite a few of these! 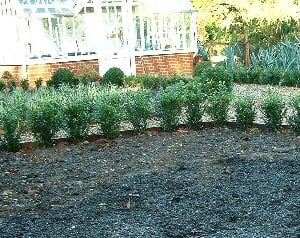 With this in mind, we have tucked the globe artichokes up for winter by removing any dead or dying growth, loosening up the surrounding soil and then shovelling some of our mulch over the crowns to insulate them from frost. We are also removing the asparagus ferns as they turn shades of autumnal brown, and next year we should enjoy a harvest from both these perennial vegetables.

Some further greenery exists amid the bare frosted earth of the garden; leeks, planted out as seedlings way back in April, are being harvested as and when; the entire bed of onion sets, planted in October, are doing very well and garlic, planted as cloves around the same time, have shoots emerging from their 4” deep planting hole. The savoy cabbages (variety Vertus) are still occupying the raised link-a-bord beds and look like forming hearts quite soon. Regular tasks include leaf raking and some light hoeing of the onions and garlic.

Under the protective cover of glass, the first batch of Broad Beans seeds are germinating in rootrainers and these will be planted out quite soon.

But now it’s time to zip up the coat, pull  the gloves on and get back out in the bracing winter air to enjoy another different season in the Kitchen Garden.