Work on the construction phase of the garden has been pushing forward apace, with the typical cold, damp and grey February weather - at least in our corner of Norfolk - not proving too much of a hindrance to our dedicated team.

The first job was to remove a section of yew hedging to allow the elegant Alitex greenhouse to become part of the garden and to clear the area to be occupied by the garden; quite how long this hedge had been in this position was difficult to say, but judging by the width of the trunk and the extent of the root system, the answer is quite some time. The arrival of a mini digger, which was used to remove the stumps and roots, was most welcome! The removal of this section will be more than compensated for by the planting of new yew and box hedging around the perimeter of the garden and to border some of the beds respectively. 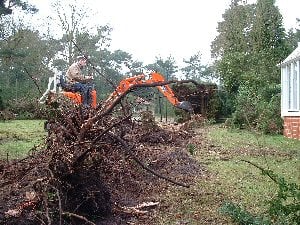 Further mechanical assistance was provided by a turf cutting machine with which we eventually managed to lift the turf - moss would be a more accurate description - which originally covered the garden site. The task of rolling the cut turf into manageable lengths followed, and we soon discovered that however good it felt to create huge rolls, lifting them was another matter! Small and lots of was definitely the way forward. Eventually all the mossy turf was removed and it was at this stage that a friendly robin, which up until now had been observing us from a distance, and no doubt chuckling to itself at our struggle, realised that as well as providing entertainment, we were a source of food. The serving of over-wintering leatherjackets was well received by our red-breasted friend who, in between dining, picked over the exposed soil carefully. 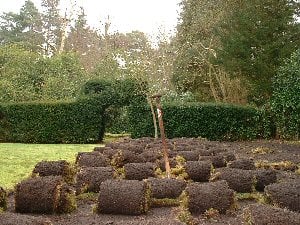 Further groundwork was required to make good the area formerly occupied by the yew hedge and it was only now the turf had been removed that we could understand the topography of the site. It was not level and dropped at least 30cm from right to left if viewed with your back to the greenhouse, according to our survey. This drop is not crucial as most of the lower area will be occupied by a pathway but we have made the decision to add 4 tonnes of topsoil to this area as well as the site of the beds. 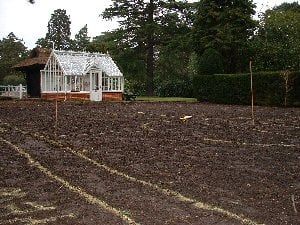 Work on the site has reached the marking and staking out stage, with a roadmap of yellow paint lines interspersed by bamboo canes and twine. We hope to be able to post a copy of the plan here very shortly, and already we are getting rather excited about what we are hoping to create and the way the area is shaping up.

Meanwhile, inside the greenhouse, there is also some activity. We have separated the garlic bulbs (cultivar Printanor) and placed the smaller cloves in a module tray and the larger in pots, in the absence - at present - of any beds for direct planting. We also have some potatoes (Sante, Colleen and Anya) happily chitting in the unheated greenhouse, and they are the subject of our first experiment. Conflicting information left us unsure of the best conditions to encourage chitting - or sprouting - of our tubers. Do we follow the cool, frost free and light road, or do we subscribe to the cool, frost free and dark view? We have placed 15 tubers from each variety in the unheated greenhouse in direct light, whilst the remaining 5 have been banished to a darker lower shelf, and we await the results, which of course we will record here, with interest.

If of course you have any information, experience and/or tips regarding chitting potato tubers, or any advice on growing garlic, or even any comments at all on what we are trying to achieve, please contact us on the web address hort@harrod.uk.com and we will post - and possibly try out in the garden - any ideas on this page.

The weather forecast for the week commencing 21st February is particularly bad for East Anglia and the country in general, with biting easterly winds and the threat of snow and ice for much of the week. How this will affect progress on site is of course yet to be seen, so please visit us again for further updates on Stephanie’s Kitchen Garden – and we look forward to receiving a deluge of ways to sprout potatoes!