Runner Bean – and Gone! A mystery is unfolding in the Kitchen Garden during the long hot days of summer – just who is responsible for eating the runner bean plants?

I should be enjoying the balmy summer days (41 de 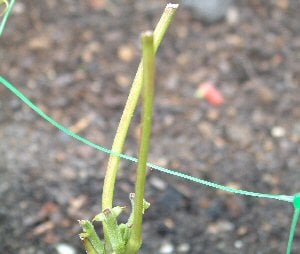 grees C according to the outside max/min thermometer) but most of my time has been taking up investigating The Case of the Damaged Runner Bean Plants. As you may recall, we enjoyed a bumper harvest of runner beans last year and were eagerly looking forward to a repeat performance. All was going well – I managed to locate the runner bean support frame and untangle the netting, the seeds were sown into the deep rootrainers and soon germinated and the young plants quickly became ready for transplanting. They were duly planted out and began winding their way happily up the pea and bean netting. I was rubbing my hands in anticipation of another monstrous yield until…

One morning I arrived at the garden and had a quick walk round all the beds as per usual. Everything was fine, there were no apparent problems until I saw the young runner bean plants – or at least what remained of them. All had been completely shorn of their large green leaves and the stem of some had been neatly severed about 5-10cm above the soil. Even the strand of netting which one plant was climbing up had been cut along with the stem! I immediately cordoned off the area and began searching for clues, but the culprit had been very clever. No footprints or feathers, no droppings and no tell-tale trail of leaves leading away to a safe location – however, I was soon able to start eliminating certain suspects from my inquiries. Bird – no, cut was too neat and unlikely to be able to sever netting; squirrel – no, netting would not support weight and cut was too high for squirrel to reach; slug (always a suspect) – no, too neat a job and aphids – no, too big a job and out of their league.

So, my two main suspects were the mouse and the rabbit. But the Kitchen Garden is rabbit-proof and the boundary netting is intact, so the blame seems to fit firmly on the shoulders of the mouse. Although there was no trial and the mouse was never captured or charged, I decided he was guilty until proven innocent and set up humane master mouse traps to prevent any further damage. I’ve also managed to rush through some replacement plants but these are way behind, so I don’t hold out too much hope of success. 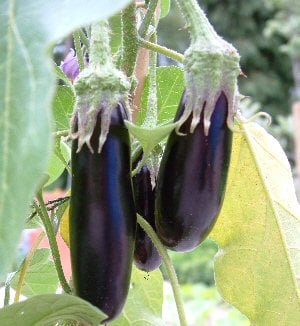 Elsewhere in the garden, there are many fruits of hugely different shapes and sizes to harvest. The blackcurrants and raspberries are providing a steady stream of soft fruit, the courgettes and squash are ready for picking almost hourly (perhaps an exaggeration – try daily) and the cucumbers are not far behind. I’ve actually managed to get the aubergine plants to bear fruit for the first time - although I suspect regular watering and the high temperatures and humidity have more to do with that than my input – and the sweetcorn plants have set cobs without exception. The dwarf French beans have finished but the French climbing beans, with their attractive purple pods, are just ready for first picking and there are a few runner beans (don’t get me started) ready as well. I’ve been harvesting and bagging up potatoes regularly, the carrots are being lifted when required and of course the greenhouse crops such as tomatoes and peppers are in full production. I’m also regularly sowing lettuce seeds to provide a succession of crops and there’s plenty of mizuna and rocket to spice up salads.

I think the key to this bumper harvest is water and because we’ve not seen many clouds recently, let alone experience any rainfall, I’ve been finding ways to use water as economically as possible. The fruit cage has been fitted out with a micro irrigation vegetable kit which drip feeds water onto the soil surface slowly, allowing it to sink down to the rootzone and not evaporate immediately. The runner beans (what remains of them) and the outd 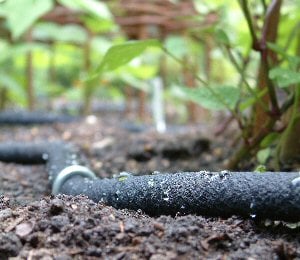 oor peppers have been fed by a similar system, as have the thirsty curcubits, whilst the bean crops on the willow obelisks and potatoes are swelled by water distributed by the soaker hose system. I am extremely fortunate that the Kitchen Garden has its own well so I can operate these irrigation lifelines, but the soaker hose can also be run off a water butt. I’ve also set up a rainwater tank which is fed by precipitation alone, ideal if, like in the Kitchen Garden, a water butt is not compatible with the greenhouse guttering. I should imagine a rainwater tank would be fought over in the allotment as well, when again, it is not practical to fill a water butt. Some other tips I’ve picked up on the subject of irrigation include watering early in the morning or later in the evening, to avoid the hottest rays of the sun drying the soil before the water can soak in, and supplying little and often rather than a deluge once a week – this is probably why the drip systems are so successful.

One back-breaking task I’ve recently completed was re-building the link-a-bord bed. Gone are the three beds in 1, 2 and 3 tier style and in their place a formal layout of 6 1m x 1m beds. This is more attractive set- 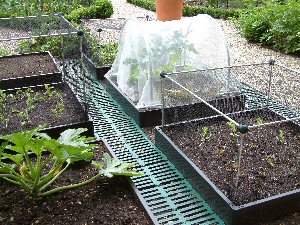 up if I do say so myself, but I wasn’t thinking that when I was moving the soil from the 1m x 2m, 45cm deep bed one hot day in July!

I must return to the garden now as I can see courgettes increasing in size before my eyes, just like time-lapse photography or filming. Please continue to visit our online Gardening Forum, linked to this website, as many of you have – a number of recipes have been posted recently and are certainly worth trying out, and you may have some more tips on how to economically water the vegetable garden. Enjoy the summer and where’s that mouse?!