Adopting a crop rotation strategy into your vegetable patch or raised bed garden is very beneficial not only to help reduce pests and disease build up, but also to create better growing conditions for the subsequent plant group.  Below shows the basic crop rotation to follow:- 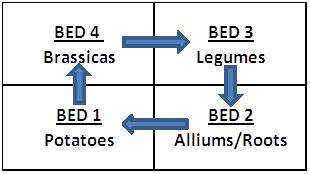 How it all works?

The plant groups are grown in different areas each year and the each group of crops will benefit from the group grown previously. Potatoes help to suppress weeds because of their dense foliage. These can then be followed by Alliums/Roots which are poor weed suppressors. Root crops are not keen on nitrogen but it’s the quality of the roots that are important, not leafy foliage. Alliums also have an anti-bacterial effect on the soil and ‘clean’ the ground ready for the Legumes the following year.  Legumes have Nitrogen fixing bacteria in their roots which fuel the hungry Brassicas the following year and so the cycle starts again with the potatoes.  Potatoes require plenty of ground work hence you start breaking up and mixing the soil without realising it.

The exceptions to the rule!

Perennial vegetables such as Rhubarb and Asparagus do not fit into the bed rotation and permanent areas should be allocated for these.  Annual crops such as Cucurbits (Courgettes, Pumpkins, Squashes, Marrows and Cucumbers), French & Runner Beans, Salads and Sweetcorn can be grown wherever you have space (preferably in a sunny spot). It is still a good idea to avoid growing the same vegetables in the same place every year.

Although crop rotation is still an integral part of raised bed gardening, it doesn't hold the same importance as in open soil beds, allotments and vegetable plots. That's because the soil in a raised bed or garden planter is regularly topped up, replaced and generally has plenty of new material added each growing season, giving soil-borne diseases such as club-root less chance of taking hold. By all means practice crop rotation in your beds if possible, but don't get too hung up on it!

If you regularly top up your garden planters with organic matter (in the shape of home-made compost of well-rotted farmyard manure), prepare the ground properly for the forthcoming crop and generally feed and care for your plants well then you shouldn’t have any problems growing a real mix of plant groups in your raised beds.

One of the main reasons to practice crop rotation is to avoid club-root, this is a notorious disease affecting brassicas in a big way.  If you’re unfortunate to get this in your garden through regularly planting brassicas in the same soil year after year, then you can say goodbye to growing cabbages, sprouts and the rest of the family for many, many years.

Please don’t be fooled into thinking that rotating crops around in this fashion is a failsafe way of preventing all pests and diseases; you will still need to practice good garden husbandry but it certainly helps to follow a cycle in the plant group order listed above.

Before you start to follow this regime religiously, you are not going to have massive crop failures if you miss a cycle or plant the wrong things in the wrong bed. This is purely a guide of best practice and you are allowed to break the rules!  A good example of breaking the rules is 'Companion planting'. Often companion planting combinations can cause conflict with crop rotation, but the results can be worth the risk.  Onions and Carrots for example can be grown in alternating rows to help confuse onion and carrot fly.

Products Featured in How To Grow: