"We remain delighted with the cage and we have had the best vegetables ever this year as the cage has kept the pigeons and squirrels out. We are very pleased with the finished product and quality of the cage." 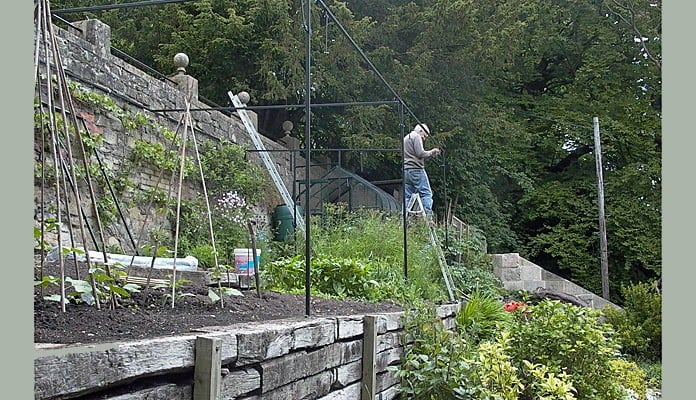 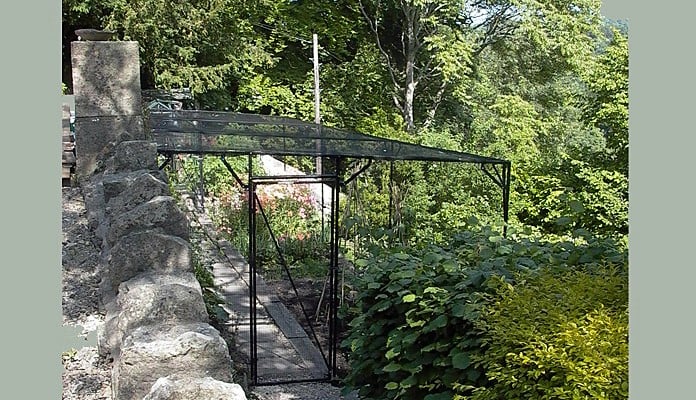 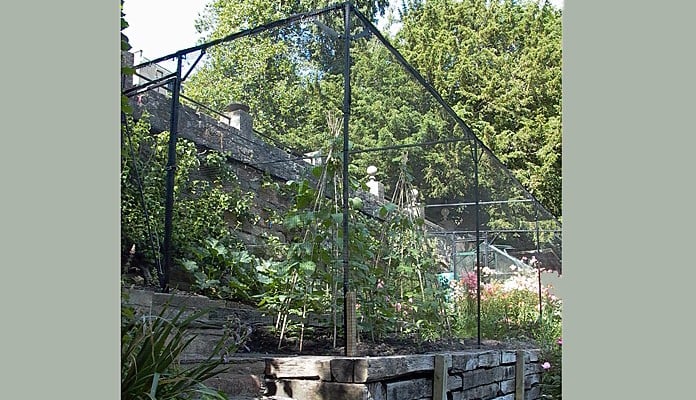 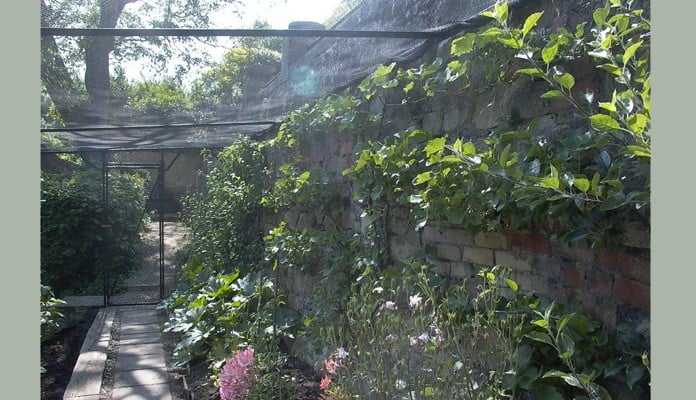 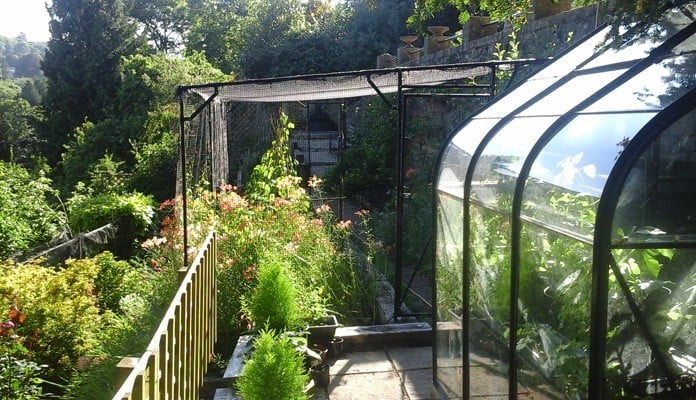 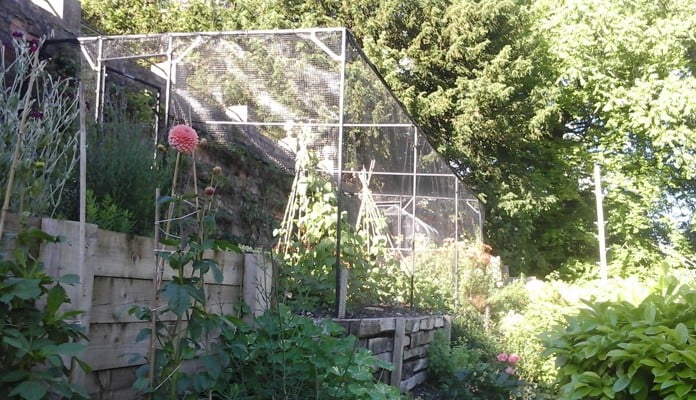 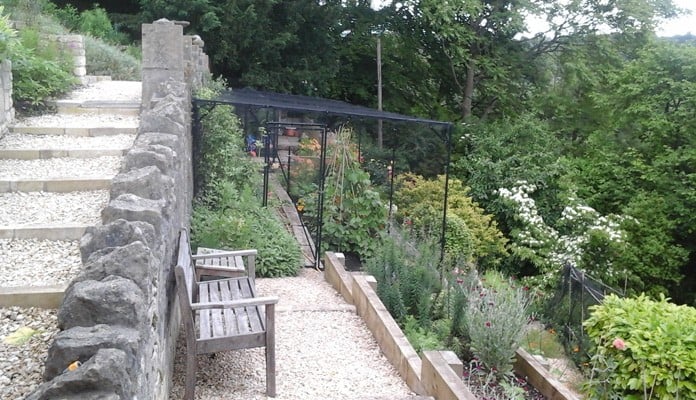 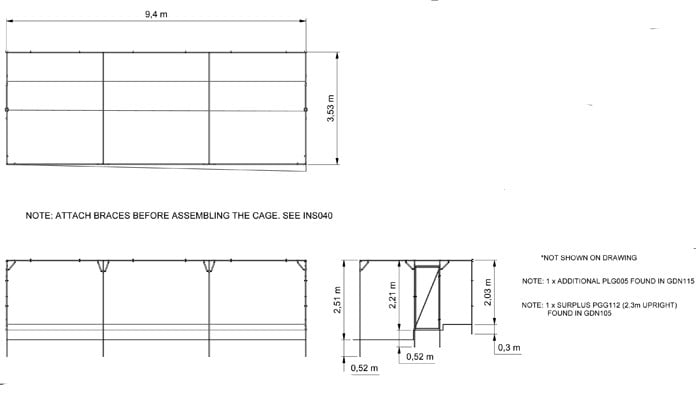 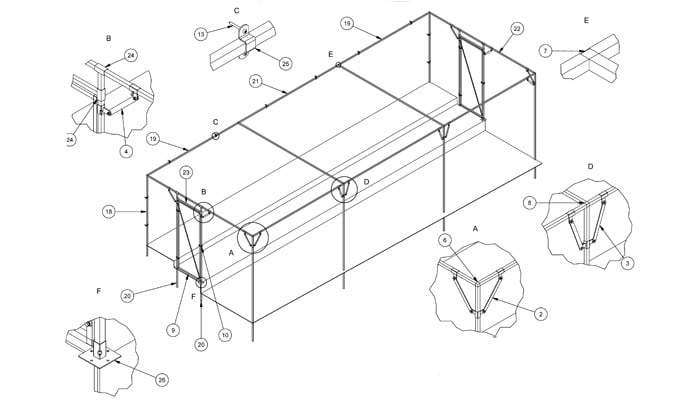 The site details/photographs provided showed a very awkward site positioned on a terraced slope against a wall.  Originally it was requested that the cage uprights needed to sit upon the sleeper surround while being attached to the back wall. After several designs going through to the customer it became apparently that it would be much easier positioning the cage slightly within the sleepers meaning that upright lengths could vary slightly. Saddle brackets were used to attach the framework to the back wall and braes were a must due to the front of the fruit cage being at 2.5m high.

"Here are pictures of our fruit cage when complete. Because of the change of levels the outside (lower) side of the cage height was 2.5 m which meant that the top construction had to be done from a step ladder (see picture), ladder or by leaning over the upper wall.The other three pictures show the whole cage looking east, another one to emphasise the slope and one from inside the cage looking west.

We remain delighted with the cage and we have had the best vegetables ever this year as the cage has kept the pigeons and squirrels out. We are very pleased with the finished product and quality of the cage.

However it took us the best part of ten days to put the cage up because of its bespoke nature, size, the change of levels and because there was a wall on one side and a drop at the end of a wall of sleepers at the other.  The height at the lower side meant that we had to do much of the work on the top of a stepladder standing on soft earth which was not easy.  However we remain sure that the effort was worth it."

"I hope the photograph brings out the slope and difficulty of putting the cage up but it also shows that it is still in excellent condition with no visible deterioration after a number of years. You can also see that we have beans and courgettes growing; there is a pear tree, vine and apple tree growing along the wall and there are alstroemerias in there too but you may not be able to spot the trees and vine very well.

Apart from the top of the cage, not much of it is not visible from the house above since it is hidden by the brick retaining wall which keeps the upper garden from sliding down the 30deg slope. It does not detract from our stunning view over the valley.

If you compare the earlier photos looking west you may notice that the very large walnut tree beyond the cage has gone – it was blown down in a gale. Happily it did not fall on to the cage and thereby flatten it! You can also see the new steps leading up to our fountain."