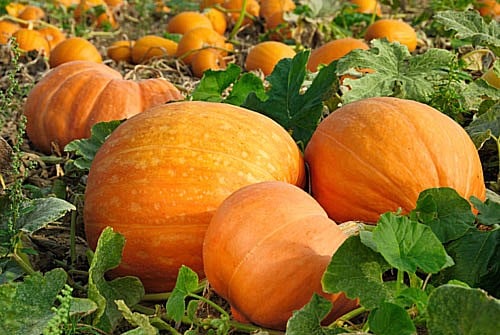 For many, Autumn is a season synonymous with pumpkins. Come October, people go wild for the squash, which has become a big part of Halloween associated traditions worldwide. While the typical traditions involve costume parties and children knocking on the doors of neighbours asking for sweet treats, this year’s activities are looking to be altogether different.

One tradition that will continue year after year is pumpkin carving. Although the obvious choice is to flock to the nearest pumpkin patch for your jack-o-lanterns, start a new autumn tradition by growing gourds in your own garden. With the right care, these hardy crops will flourish just about anywhere. And for those lucky enough to already have their own patch, now is the time to start harvesting your orange beauties.

Did you know? Although often thought of as a vegetable, pumpkins are actually a fruit

Often, the hardest part of growing pumpkins is choosing which type to plant. Pumpkins come in hundreds of varieties differing in size, colour, taste and texture. Here’s just a few of those options:

These are the pumpkins to choose if winning a growing contest is on your to-do list. You’ll need a large patch to handle their full potential.

Due to their small but cute stature, these tiny pumpkins are best displayed as they are. Carving could be tricky but painting them would be a fun alternative.

Classic, orange and perfectly round in shape, these varieties lend themselves perfectly for carving.

With a quirky appearance, these pumpkins make for an unusual autumnal display. They also work well as creepy Halloween props.

For best results, it’s recommended to sow pumpkin seeds in a greenhouse or indoors on a windowsill and plant out into the garden once the risk of frost has passed. Typically, early June is the ideal time to transfer your pumpkins. Make sure you choose a spot that receives plenty of sunlight.

Leave pumpkins on the plant for as long as possible to mature and ripen. When the stem cracks and the skin is tough, the fruit is ready to be picked. This is often anywhere from 75-115 days after sowing. Monitor the patch well as some pumpkins may be ready to pick before others. Use a sharp knife to cut the pumpkin from the vine, leaving roughly 2 inches of stem.

Tip: Make sure you handle your pumpkins carefully to avoid any bruising.

Clean your harvested pumpkins with soapy water to remove any dirt and place in direct sunlight for 2 weeks before storing. In poor weather, place them in a greenhouse or on a sunny windowsill. Once your fruits are stored, they can be kept for 3-6 months.

A second life for jack-o-lanterns

Wondering what to do with all the leftover pulp, seeds and skins? Look no further, we’ve come up with some edible, useful and creative ways to put your pumpkin waste to use.

Roasted pumpkin seeds. Save all of the seeds and simply roast with a little salt. Healthy and delicious.

Pumpkin bread. You can make anything into bread these days and this loaf has to be one of the tastiest variants.

Feed the wildlife. Once you’re done displaying your carved pumpkins, cut them up and place around your garden. Sit back and watch as deer, rabbits and even hedgehogs make short work of them.

Unique birdfeeder. Sprinkle feed on the base of your hollow pumpkin and hang from a tree using thick twine or simply add the pumpkin seeds to your bird seed feeder.

Whether its for cooking, carving or both, growing pumpkins is both fun and rewarding. Get prepared today and enjoy a delicious harvest next autumn.